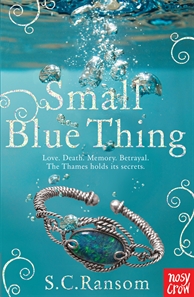 Love. Death. Memory. Betrayal. The river has its secrets. But one mysterious bracelet will unlock it all and lead Alex down a path that will lead her to fall in love and risk everything.

Celebrating the end of exams with best friend Grace, 17 year-old Alex rescues a swan caught on a wire in the Thames mud and finds an extraordinary bracelet. Through its disturbing and compelling powers, she finds Callum, a soul locked in a half-life of sadness and mystery following a terrible accident, and his persuasive and sinister sister, Catherine. As Alex and Callum grow closer despite the enormous obstacles to their love, the dangers mount until they must risk everything.

Sue Ransom is a senior head-hunter, but on the way to work and in the evenings she's a writer: she wrote Small Blue Thing, her debut novel, as a birthday present for her daughter, and she composed it mostly on her BlackBerry. Serendipity led her to Nosy Crow, and she's now busy writing her second book and planning the third in what will be a trilogy. She lives with her husband and two teenage children in Surrey.

Small Blue Thing is the first book in a series by author S.C.Ransom. Small Blue Thing is set in London, and follows the story of animal-lover Alex, who, while attempting to rescue a swan, discovers a mysterious bracelet, which leads her to Callum, a beautiful boy who she falls instantly in love with.

The story centres on Alex who finds an exquisitely unique bracelet in the river Thames. She fishes it out and takes it home but soon discovers that the bracelet has some strange powers. It enables her to communicate with the river's dead which leads her to the handsome and mysterious Callum. Callum and Alex fall in love but they cannot be together because Callum is a dirge - destined to live on the other side and feed off peoples' happy memories to keep his own misery at bay. Alex is determined to find a way in which they can be together properly but when Callum's sister Catherine appears, she has to decide who she can trust and who holds her future happiness in their hands.

The suspense builds beautifully, leaving you trying to figure out who is good and who is bad while desperately wanting everything to work out well. A nice cliff-hanger ending too - be warned, you'll want to read the next one in the series!
Posted by Scott Wilson at 9:00 PM