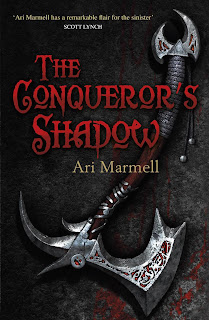 Fantasy just got a new anti-hero.

They called him the Terror of the East. His past shrouded in mystery, his identity hidden behind a suit of enchanted black armour and a skull-like helm, Corvis Renbaine carved a bloody path through Imphallion, aided by Davro, a savage ogre and Seilloah, a witch with the taste for human flesh.

No weapon could stop his demon-forged axe. No magic could match the spells of his demon slave, Khanda. Instead of ruling Imphallion, Rebaine settles down with the young noblewoman Tyannon to live in obscurity and raise a family. But, when his daughter is assaulted by the warlord Audriss' goons, Rebaine once more dons the armour of the Terror of the East and seeks out his former allies to rescue the country he once tried to conquer.

Ari Marmell has an extensive history of freelance writing, which paid the bills while he worked on improving and publishing his fiction. THE CONQUEROR'S SHADOW was his first wholly original novel.

The first Ari Marmell book I read was a Wizards of the Coast fantasy, so it was pretty much a formula driven format. In The Conqueror’s Shadow, the formula is still there, but the story seems more natural and free flowing. The story revolves around Corvis Rebaine's attempt to conquer a kingdom, driven by a slow flashback scenes.

The periodic action sequences are very well-written, with enough humor thrown into the book to really make the characters and dialogue seem realistic.

We get a chance to sympathize with the character before finding out the full extent of his dark deeds. In the present, another would-be conqueror is following in Rebaine's footsteps, using many of the same allies and methods. Rebaine, who has been living in hiding for seventeen years, comes out of retirement when his family is threatened. Only this time he must find a way to stop the conqueror and save the kingdom.

Overall, the book was an enjoyable read.
Posted by Scott Wilson at 2:57 PM