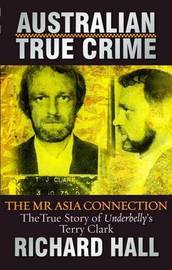 These were the bad habits that brought down the 1970s international heroin empire, the Organisation.

On 9 October 1979 the mutilated body of Martin Johnstone, the Organisation's Singapore man, was dumped in an abandoned stone quarry, under orders of Terry Clark.

In five short years Clark, a small-time New Zealand criminal, had built a multi-million dollar drug empire servicing Australia, New Zealand, England, Scotland, Spain, Italy and the United States. Martin Johnstone - dubbed 'Mr Asia' by the media - was killed because he had become a liability to the Organisation.

This book is in the Australian True Crime series by Five Mile Press and written by one of the most recognised authorities on Australia’s worst criminals and serial killers. If you are interested in true crime books then this one will appeal to you. It is written with a great deal of research and depth, apparent by the explicit details of the crimes, criminals and victims.

Mr Asia is the account of a New Zealand Criminal and drug trafficker lured to Britain to make a big drug deal in Scotland, only to be murdered by Andy Maher on order of Terry Clark. There were five people arrested and sentenced to life imprisonment for the murder.

This book is not quite like the others in the Australian True Crime series as it deals mainly with a small group of related parties and the multi-million dollar international heroin empire of Terry Clark. It is an interesting read about an Underbelly style criminal entity that will probably appeal to those that found the television series interesting.
Posted by Scott Wilson at 2:21 AM