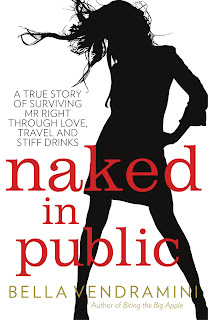 Bella Vendramini knows that any good adventure starts with running away from home, but packing thirty or so cities into just over a year was probably going a bit overboard.

Brace yourself for a tropical jungle, an exploding building, a Parisian love affair, a life-changing romance (or two), depression, acting in the New York theatre, spanking lessons, a Tarantino blockbuster, a German concentration camp, a New York society wedding (Bella's), a wreck of a marriage (yep, Bella's again), serial burglary, murderous hitchhikers, digging up dead people, champagne on the French Riviera, driving the Monte Carlo Grand Prix circuit (drunk), breaking into the Cannes Film Festival, uprooting friendships, the beating of her life, fleeing a detention centre in Canada, having an out-of-body experience in a gutter and more than a few sanity pleas... Bella figures she finally knows a thing or two about adventure - and about fortune.

Bella Vendramini holds dual Australian and New Zealand citizenships and is the daughter of author Rosie Scott and filmmaker Danny Vendramini. In her acting career, Bella has performed on the stage and in various films, including the title role in the Australian independent feature film Playing With Piranhas . She won the audience award for Best Actress at the TAP gallery awards for the short film, The Philanderers . Bella trained at The Actor's Center, NIDA and The Lee Strasberg Institute of New York.

Naked in Public continues on the story of the struggling actress in New York that we began in the previous book, Biting the Big Apple. Naked in Public is Bella Vendramini’s follow-up to her first autobiography, Biting the Big Apple is another great read. While a tad more serious that the first book, Vendramini still manages to find humour in some horrible domestic situations and she shines through as an incredibly strong, independent woman.

I found Vendramini’s travels around the world very interesting, both because I’ve never travelled and also because it is interesting to read the true accounts of something like this author. It is amazing to read of the thirty or so cities that she visited in just over one year.

Bella must be a huge Quentin Tarantino because of the stories about him scattered throughout her books. Her life is one big rollacoaster with the stories of depression, romance, the live theatre, travel and spanking lessons.

Worth a read even if you’ve never heard of the author before.
Posted by Scott Wilson at 9:09 PM