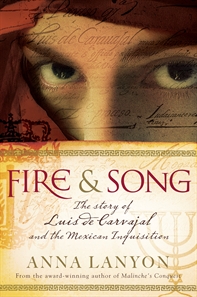 Tells the story of the Jewish martyr Luis de Carvajal, and his sister, Leonor, who died together in Mexico City in 1596, exploring his determination never to lose heart, no matter what, and to cling to his faith and cultural identity in the face of totalitarian oppression.

It is1596 and in Mexico the Inquisition is at its most efficient. A young man trembles in his cell as he prays for salvation, torn between the Christianity he was schooled in and his ancestral faith. What heresies will the Holy Office uncover? Can he protect his mother and sisters?

He is Luis de Carvajal. His forbears had fled the Inquisition in Spain to Portugal and then from there to the New World. But the lives they try to rebuild as conversos in Mexico are just as perilous, for the Inquisition is determined to root out heretics throughout its realms. Luis's quest for true faith unfolds a tense and moving narrative, as he and his family's spirit and ingenuity are tested again and again.

Anna Lanyon's Malinche's Conquest was awarded and widely translated, and was followed by The New World of Martin Cortes. Fire and Song also shows her as the historian whose chronicles from contemporary testimonies are so vivid that readers feel witness to the dramatic events and intimate moments of individual lives, woven deftly into the fabric of their times to illuminate the bigger historical picture. Fire and Song presents a world without the human rights and tolerance we take for granted today; yet the insights remain all too pertinent - into the power of faith, the tangled knot of religious and political interests, and human yearning for identity, belonging and spirituality.

Anna Lanyon studied Spanish, Portuguese and History at La Trobe University in Melbourne. She travelled widely before settling with her family on the southern coast of Victoria, near Portland. She teaches and translates Spanish, and is the author of Malinche's Conquest (A+U 2000). She works in Portland for La Trobe University's Centre for the Study of Mothers' and Children's Health, and continues to write whenever she can.

This is Anna's third book, like Malinche's Conquest and The New World of Martin Cortes, explores events that occurred in Mexico during the sixteenth century.

Fire & Song takes us on a sixteenth century journey from Spain to Portugal to Mexico, recording the faith of secret Jews and their persecution in Christendom. More predominantly the story details the history of the Carvajal family and the lengths Luis de Carvajal went in order to uphold his belief while being subjected to two Inquisitions by the Holy Office.

Yet it is from the records of the Holy Office that this true story of the life of this family, at home and in prison that this account is recorded. That said, these would remain archived records about long-dead, long-forgotten people, if it wasn’t for the kind of historian and story-teller that Anna Lanyon is.

It is truly horrific that these events actually happened.
Posted by Scott Wilson at 10:01 PM