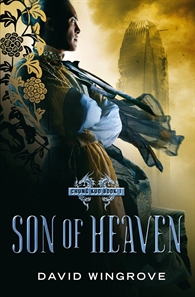 The year is 2065, two decades after the great economic collapse that destroyed Western civilisation. With its power broken and its cities ruined, life in the West continues in scattered communities. In rural Dorset, Jake Reed lives with his fourteen year old son and memories of the great collapse. Back in '43, Jake was a rich, young futures broker, immersed in the datascape of the world's financial markets. He saw what was coming - and who was behind it. Forewarned, he was one of the few to escape the fall.

For 22 years, he has lived in fear of the future, and finally it is coming - quite literally - across the plain towards him. Chinese airships are in the skies and a strange, glacial structure has begun to dominate the horizon. Jake finds himself forcibly incorporated into the ever-expanding 'World of Levels' a global city of some 34 billion souls, where social status is reflected by how far above the ground you live.

Here, under the rule of the mighty Tsao Ch'un, a resurgent China is seeking to abolish the past and bring about world peace through rigidly enforced order. But a civil war looms, and Jake will find himself at the heart of the struggle for the future.

David Wingrove is the Hugo-Award winning co-author (with Brian Aldiss) of The Trillion Year Spree: The History of Science Fiction. He is also the co-author of the first three Myst Books - novelisations of one of the world's bestselling computer games. He lives in North London with his wife and four daughters.

Son of Heaven is book 1 of 20 in Wingrove's retelling and elongating of his 8-book epic Chung Kuo which was published from 1989 to the late 90's. If you are a sci-fi fan or fantasy fan, if you like Asian culture, if you like politics, if you find yourself frequently asking the question "what if?" then you have to get Son of Heaven. It's the first step in an epic journey that you will never forget.

In this alternate future Earth, the Chinese, under the leadership of one brilliant and capricious man, successfully set the Information Age back hundreds of years. Lawlessness abounds and small communities band together for mutual protection and trade. There are three distinct parts. The story opens in 2065, in rural Dorset, England. Twenty-two years after the collapse, tensions are, once again, mounting, as rumours fly across the land and an unnatural, huge, white structure can be barely discerned on the edge of the horizon. The second part delves backwards in time as details of the economic crisis and ultimate collapse are relayed. It is in this part we discover the role Jake played and relive those harrowing days with him. Then finally, in the third section, the invading force arrives with superior numbers and high-tech weapons, this relentless force seems to be unstoppable and determined to “process” every last living soul.

This book is brilliant and I can’t wait to read the remaining books in this series.
Posted by Scott Wilson at 9:16 PM