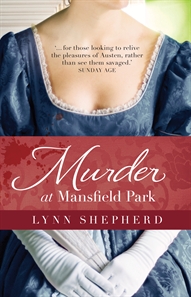 A superb retelling of the Jane Austen novel in which Mansfield Park's meek heroine Fanny Price is recast as a forthright, ambitious, scheming and downright untrustworthy gold digger ...

'...a clever retelling of the classic, seamlessly blending Austen's original dialogue with her own, while introducing the new character of Charles Maddox, a "thief taker"...' Good Reading

'... for those looking to relive the pleasures of Austen, rather than see them savaged.' Sunday Age

Formerly Austen's meekest heroine, Fanny Price has become not only an heiress to an extensive fortune but also a heartless, scheming minx. Hiding her true character behind a demure facade, Fanny is indeed betrothed to Edmund, now Mrs Norris's stepson; but does she really love him? Henry and Mary Crawford arrive in the country ready to wreak havoc with their fast city ways, but this time Mary steps forward in the best Austen style to become an unexpected heroine.

Meanwhile, tragedy strikes the safe and solid grand house as it becomes the scene of violence. Every member of the family falls under suspicion and the race begins to halt a ruthless murderer.

Funny and sharp, Murder at Mansfield Park is simply a delight to read.

Murder at Mansfield Park is Lynn Shepherd's first novel and was published in the UK and the US to wonderful reviews. Lynn, a successful copywriter, studied English at Oxford in the 1980s and returned in 2003 to do her doctorate.

Murder at Mansfield Park is a brilliantly written story in the style of Jane Austen.I liked the characterizations in thisbook, which are wonderful, storyline is clever and Shepherd has very ingeniously taken the original and shifted it into its own weird universe. Lots of these Austen prequels and sequels never work for me with a few notable exceptions. this one, i thoroughly enjoyed. Ms. Shepherd has a Ph.D. in English literature from Oxford, and it shows. Her command of the vocabulary of the Austen era is pitch-perfect. She also scatters learned references throughout, lifting entire sentences and paragraphs not just from MP but from the other novels, as well as from the letters and from Austen biography.

Shepherd has, in writing such a clever, entertaining, humorous, and enjoyable tale, achieved the impossible task of tempting a once-bitten-twice-shy reader such as myself back through the ominous gates of Mansfield Park. She has successfully taken a story which could send even the most faithful Regency readers straight to sleep and turned it into a fast-paced, witty, brilliant tale that all Jane Austen fans will praise as the perfect answer to Jane's Fanny Price.
Posted by Scott Wilson at 8:36 PM