BOOK REVIEW: Desires of the Dead 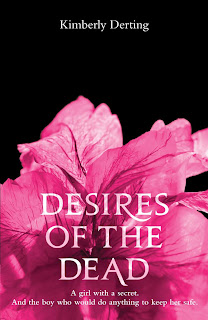 Title: Desires of the Dead

Kimberly Derting is back with a follow-up to The Body Finder, and there's more paranormal suspense and romance in store for Violet and Jay.

Violet and Jay are finally dating, but adjusting to the new relationship is not as easy as Violet anticipated. Especially when she has to split Jay's time and attention with his new best friend, Mike, and Mike's pesky younger sister - who happens to be obsessed with Jay. Meanwhile, when Violet's special abilities lead her to the body of a young boy, her tip to the police puts her on the radar of the FBI. Violet tries to fend off the FBI's questions while maintaining the semblance of a normal life, but somebody's leaving her threatening notes and an echo around Mike's house reinforces that all is not right. Violet is forced to admit that perhaps the only people who can help her figure it out are the very people she's desperate to avoid - the FBI.

Kimberly Derting is a full-time writer who lives in Western Washington state with her husband and three children. DESIRES OF THE DEAD is her second novel.

Desires of the Dead is the second book in The Body Finder series by author Kimberly Derting. In this sequel to "The Body Finder" the missing dead are still calling to Violet and they want to be found. Just when Violet finally begins to piece her life back together after the 'serial killer' fiasco she discovers the body of a young boy and this catches the attention of the FBI. See, the FBI is onto her, they know there's something different about her and they are catching on quick. Now that Jay's her boyfriend and not so much her best friend anymore, she begins to struggle with what she can and can't trust him with. Then she stumbles upon Mike, a transfer student and Jay's new "attached at the hip" friend.

In Desires of the Dead, we're back in Violet's life after she escaped a near death experience with a serial killer. Even though a bit shaken, Violet is still enjoying her life with her yummy new boyfriend, Jay. I was so excited to see Jay again. Their relationship is such a deep one seeing as these two have been friends since they were children, and truly do care and love one another.

Violet's sense of echoes and the secret she has kept well hidden captures the interested of a woman named Sarah from the FBI after Violet places an anonymous call about a body she had came across.

If you enjoyed The Body Finder, you will easily devour Desires of the Dead. The book is a superb paranormal crime-thriller meets YA romance.
Posted by Scott Wilson at 8:29 PM