BOOK REVIEW: Bite Me If You Can 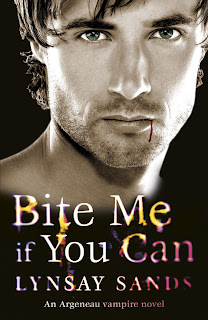 Title: Bite Me If You Can

A rogue vampire turned her. Now a vampire hunter is going to save her...

One minute Leigh was walking home in the early hours of the morning and the next a vampire was sinking his teeth into her neck. It turns out he was a rogue vampire already marked for termination...but that doesn't do Leigh any good. The damage has already been done: she's become one of them.

Lucian Argeneau, rogue vampire hunter, has been alive for over two thousand years and there's not much that can excite him anymore. Food has become tasteless, sex is ordinary, life is increasingly bland. Then Leigh drops into his life and suddenly he finds himself craving coffee...and imagining the sassy brunette atop the black satin sheets of his lovely big bed! It's Lucian's job teach Leigh about being immortal, a task made more difficult as tutoring her ignites a fire in him that hasn't burned for centuries. But until they stop a renegade bloodsucker from destroying the human race, the passion will have to wait!

Lynsay Sands was born in Canada and is an award-winning author of more than 30 books, which have made the Barnes and Noble and New York Times bestseller lists. She is best known for her Argeneau series, about a modern-day family of vampires.

Bite Me If You Can is the sixth book in the Argeneau Vampire series by author Lynsay Sands. This novel revolves around Lucian, the twin brother of Jean-Claude, Marguerite's deceased. He's one of the original immortals, and has lived for over two thousand years. He's on the Council and hunts down rogue vampires. It's while he's on the hunt for another ancient vampire, Morgan, who has started his own "nest", that he encounters Leigh. Morgan has just turned her but she hasn't yet gone through the painful process when Lucian grudgingly rescues her.

Leigh's walking home one night minding her own business when bam, a slightly out of it employee who disappeared a few days ago has his new friend, Morgan, bite her, trying to convert her into a vamp. Morgan has started the process to turn Leigh. He has been turning people left and right to create his own vampire clan.

They begin to turn her, kidnap her, just when she is escaping two men burst in, and that's all Leigh remembers. Lucian is one of these two who were going to destroy the new vampire nest and when he discovers Leigh is not yet a vampire. Instead of destroying her with the others, he takes her home and protects her.

I recommend reading the other books in this series to get the full enjoyment of this novel.
Posted by Scott Wilson at 10:47 PM