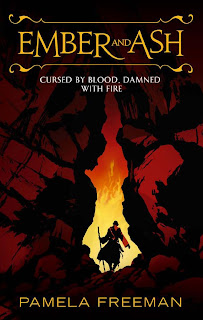 Two peoples have been fighting over the same land for a thousand years. Invaders crushed the original inhabitants, and ancient powers have reluctantly given way to newer magics. But Ember was to change all this with a wedding to bind these warring people together - until her future goes up in flames.

Ember s husband-to-be is murdered by a vengeful elemental god, who sees peace as a breach of faith. Set on retribution, she enlists the help of Ash, son of a seer. Together they will pit themselves against elementals of fire and ice in a last attempt to end the conflicts that have scarred their past.

They must look to the present, as old furies are waking to violence and are eager to reclaim their people.

BLOOD TIES, released in 2007, was Pamela Freeman's first novel for adults. It was followed a year later by the second book in The Castings Trilogy, DEEP WATER. FULL CIRCLE, the final in the trilogy, was published in 2009. Pamela is also an award-winning writer for young people, and is best known for the children's fantasies VICTOR'S QUEST and VICTOR'S CHALLENGE, and for THE BLACK DRESS, an inspired biography of Mary MacKillop's early years, which won the New South Wales Premier's History Award in 2006. She has a Doctorate of Creative Arts from the University of Technology, Sydney, where she has also lectured in creative writing. She lives in Sydney with her husband and their son.

Ember and Ash by Pamela Freeman is a fantasy set in the Last Domain of the Eleven Domains. The fantasy setting revolves around the Great Powers: Fire, Water, Air, Earth, Forest and Ice. The book starts off with a catastrophic wedding followed by a poignant quarrel between the central character and one of the Great powers. As a result fires all over the domain are smothered and cannot be re-lit.

The magic in this novel is natural, based on Powers of environment elements, which isn't exactly new, but the author does a good job of making each elemental terrifying in its own way.

Freeman also creates a complex set of layers of political/social/religious belief in the story. The main characters come from a background of two peoples, one of which has been subsumed by the other. They have taken some of their beliefs underground, as they are forbidden to share certain knowledge with non Travelers, and this influences heavily on the plot of the novel.

There was a mixed bag of other supporting characters in the book, who all added significant flavour to the storyline. Ember is feisty, and marked by the element of Fire, and Ash by Air. The secondary characters were all interesting as well, each having their own driving motivations and story lines that were also fulfilled throughout the novel.
Posted by Scott Wilson at 7:02 PM