BOOK REVIEWS: Where The Bodies Are Buried 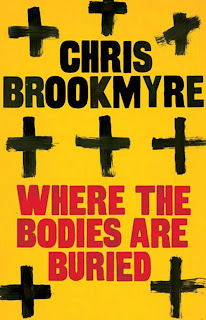 Title: Where The Bodies Are Buried

The brilliant new novel from the bestselling author Chris Brookmyre - and a change of direction.

Detective Catherine McLeod was always taught that in Glasgow, they don't do whodunit. They do score-settling. They do vendettas. They do petty revenge. They do can't-miss-whodunit. It's a lesson that has served her well, but Glasgow is also a dangerous place to make assumptions. Either way she looks at it, she recognises that the discovery of a dead drug-dealer in a back alley is merely a portent of further deaths to come. Elsewhere in the city, aspiring actress Jasmine Sharp is reluctantly - and incompetently - earning a crust working for her uncle Jim's private investigation business. When Jim goes missing, Jasmine has to take on the investigator mantle for real, and her only lead points to Glen Fallan, a gangland enforcer and professional assassin whose reputation is rendered only slightly less terrifying by having been dead for twenty years. Cautiously tracing an accomplished killer's footsteps, Jasmine stumbles into a web of corruption and decades-hidden secrets that could tear apart an entire police force - if she can stay alive long enough to tell the tale

Where The Bodies Are Buried is a change in direction for author Christopher Brookmyre, with his latest book being a straight whodunit style story. There are two main strands that interweave in this novel. The first concerns a young woman called Jasmine, who is struggling to get over the death of her mother which has effectively left her orphaned as she never knew her father. Her Uncle Jim has taken pity on her and given her work as his assistant in his private investigation business, at which she is proving rather inept. Jasmine turns up to work one day to find Jim missing and attempts to track him down using some very incomplete records relating to the latest case he was working on.

In Where The Bodies Are Buried, these are the things he’s focused on – a top rate mystery/thriller populated by characters with lives and histories that explain their actions, forward the plot and, now and them, make us want to give them a wee hug.

It’s about a dead drug dealer and Detective Catherine McLeod’s efforts to find the killers. McLeod doesn’t have a drink or drug problem and is happily (most of time) married. She has kids who wake her up in the middle of the night and worries about the same stuff the rest of us do, while trying to do her job. Oh, and she hates gangsters.

Jasmine Sharp is an out-of-work actress who is employed by her ex-police force PI uncle Jim, to help him out with the usual ham-fisted insurance claims and scams that make up the majority of his work. When Jim goes missing however, Jasmine discovers that he's been working on a couple of other long-standing missing person cases that may be linked to his own disappearance. The Glasgow police however have other matters to worry about when DI Catherine Geddis looks into the killing of a criminal that seems to have sparked off a war between the city's drug lords, but finds that her investigations appear to be hampered from agencies within the police force itself. Evidently there a connection between the two cases and it involves the biggest organised crime group in the city.

This is a well written, sparsely told tale with characters I want to see more of.