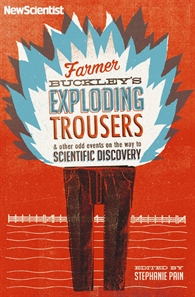 The all-but-forgotten heroes and highlights of everyday science - including some who are Australian and New Zealand!

In August 1931, New Zealand farmer Richard Buckley hit the local headlines - or rather his trousers did. One minute they were drying in front of the fire; the next there was a huge blast and a ball of flames. Farmer Buckley's trousers had exploded. The culprit? A popular pesticide of the day, which when combined with clothing fibres unexpectedly formed a highly combustible compound. This incendiary story is a striking example of how scientific advances meant to improve people's lives can sometimes backfire.

Contrary to the widespread belief that science and technology move steadily on from one discovery to the next, the fascinating stories in this entertaining collection present some of the unfamiliar characters and events that little the path of scientific progress, where setbacks and mishaps are the norm, and breakthroughs are the exception.

Farmer Buckley's Exploding Trousers is compiled and edited by Stephanie Pain, a consultant for New Scientist with a PhD in deep-ocean biology. She created and ten years edited New Scientist's popular 'Histories' column, where the stories in this book started out.

This book has some of the most bizarre tales that i’ve ever read, such as the exploding trousers of the title (caused by farm workers using the oxidant sodium chlorate as a weedkiller, toads appearing inside rocks or the surprising invention of high quality stereo recording during the Second World War. The subtitle claims the book's subject is 'odd events on the way to scientific discovery' but in reality there is relatively little science here - it's much more about technology, though remaining none the worse for that.

Overall this was a solid book that had a QI-like 'quite interesting' atmosphere, and plenty of historical content, but with a rather less populist feel than its predecessors.