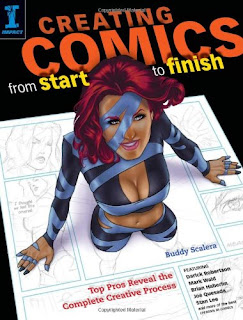 Buddy Scalera is a comic and graphic novel writer, and he was the creator and editor of Wizard Entertainment’s WizardWorld.com and WizardSchool.com websites. He is also known for his photography as the author of the bestselling Comic Artist’s Photo Reference series (IMPACT Books) and CD-ROM series Visual Reference for Comic Artists. He also self-publishes with After Hours Press. Scalera has hosted sessions on creating comics at WizardSchool.com online and Wizard School workshops at Wizard World conventions; and he also wrote and hosted ComixVision, A cable TV show explaining the comic hobby, for over four years. Visit his website www.buddlyscalera.com.

This educational reference book uncovers the complete workflow of comics from concept to completion. Rather than focus on just one small part of the business, “Creating Comics from Start to Finish” gives a deep, intelligent look at the people who create comic books. It’s truly a comic school in book form for people considering a career in comic books.

This how-to-create-comics book is definitely aimed at the old-school, “I want to make superheroes” aspiring creator, from the big back-cover headline “You can work professionally in comics!” to the list of those interviewed, which includes Batman editor Mike Marts, Mark Waid, Darick Robertson, Joe Quesada, and Stan Lee.

The book feels to me like an instant time capsule of how things used to be. The modern way to build a career in comics is to make your own, self-publish or post them on the web, and drive your own future instead of waiting to be selected by an editor or company.

Unlike many how to books that begins the creation process with the often used penciling tutorial of shapes and manikins, Buddy instead starts with the role of the editor. This, if one thinks about it, makes perfect sense. The editor is the one around which all the activity of a comic book revolves. As Buddy clearly illustrates, the editor is involved on each aspect of the creation process up to the point of distribution. This is also the first foray into what makes this book unique. In addition to his own insights, Buddy seeks the opinions of creators in each of the disciplines. In the case of editors, he talks with DC's Batman group editor Mike Marts. Marts believes that if things go well, an editor will take none of the credit but will take all of the blame if things go wrong. He also says one of the best parts of his job is discovering new talent and giving those people works. The thing he finds the most challenging is getting everyone on the same page.