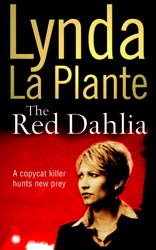 Detective Anna Travis is working on a horrific, brutal murder case that has created a media frenzy. The victim, Louise Pennel, a 24-year-old, single, 'fun-loving' girl, was last seen in a London night club wearing a sequinned mini-dress and a red rose in her hair.

In an eerie mirror image of the famous LA murder case of Elizabeth Short in the l940s known as the Black Dahlia, her body was found dumped by the River Thames… severed in half and brutalised beyond recognition.

Anna Travis must summon all the strength and guile she became so well known for in ABOVE SUSPICION to hunt down this sadistic killer.

A young girl’s mutilated body has been discovered and Detective Inspector Anna Travis is on the investigating team along with Detective Chief Inspector James Langton, who I gather she had a romantic relationship with earlier. They find this murder is based on a 1940’s case in Los Angeles that was called “The Black Dahlia”, a case that was never solved, this case is dabbed “The Red Dahlia” because of the flower in the victims hair.

The police have a bit of trouble piecing the crime together it would not have happened if someone had not given them a name to go on. Even with the name, they had a little trouble putting it all together.

The novel is absolutely a mystery lover's novel. The first half of the book involves the team getting up to speed with the Black Dahlia case and trying to find out as much as they can about the victim, while the second half is all about locating the killer after an anonymous caller reluctantly leaves information about the murder. The mystery is very tightly plotted and the writing is excellent. LaPlante's characterizations are very well drawn, never being dragged down to the level of cardboard cut-outs, the action never stops and the payoff is worth the 400+ pages of reading. I can most highly recommend this book -- it is probably one of my favourite mystery reads in a while