BOOK REVIEW: A Clash of Kings: Book 2 of A Song of Ice and Fire 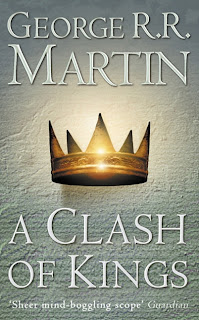 Title: A Clash of Kings: Book 2 of A Song of Ice and Fire

The Iron Throne once united the Sunset Lands, but King Robert is dead, his widow is a traitor to his memory, and his surviving brothers are set on a path of war amongst themselves. At King′s Landing, the head of Lord Eddard Stark rots on a spike for all to see. His daughter Sansa is betrothed still to his killer′s son Joffrey - Queen Cersei′s son, though not the son of her late husband Robert. Even so, Joffrey is now a boy-king, Cersei is his regent, and war is inevitable.

In Dragonstone, Robert′s brother Stannis has declared himself king, while his other brother Renly proclaims himself king at Storm′s End - and Eddard Stark′s fifteen year old son Robb wears the crown of the north at Winterfell.

A comet in the night sky, red and malevolent, the colour of blood and flame, can only be an omen of murder and war. Stannis′s child Princess Shireen dreams of dragons waking from stone. And a white raven has brought word from the Citadel itself, foretelling summer′s end. It has been the longest summer in living memory, lasting ten years, and the smallfolk say it means an even longer winter to come...

The first rule of war is never give the enemy his wish. But winter will be the biggest enemy. From beyond the Wall the undead and Others clamour for freedom, and from beyond the sea the long-dead Dragon King′s daughter hatches her revenge. Robb Stark will be exceedingly lucky to reach adulthood.

The second book in the series and picks up where the other left off. War is everywhere and the relm has 4 claims for king. But there is more changing than just the alliances....magic appears to be returning; an ultimate betrayal of great proportion; and of course Winter is Coming and so is Fire and Blood.

The characters are all growing within the confines of the story, with the exception of say Sansa and she is still my most loathed character. However, I understand that we're supposed to find fault with her and her childish views when disaster and ruin are around us.

I have every confidence that the author will redeem her in our eyes and she will grow as much as Jon, Bran and Arya have.