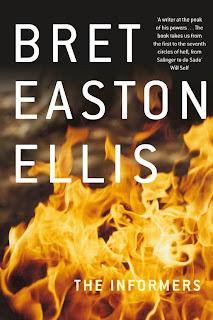 Dirk sees his best friend killed in a desert car wreck, then rifles through his pockets for a last joint before the ambulance comes. Cheryl, a wannabe newscaster, chides her future stepdaughter, 'You're tan but you don't look happy'.

Jamie is a clubland carnivore with a taste for human blood. The characters go to the same schools and eat at the same restaurants. Their voices enfold us as seamlessly as those of DJs heard over a car radio. They have sex with the same boys and girls and buy from the same dealers. In short, they are connected in the only way people can be in L.A. - suffering from nothing less than the death of the soul.

'A writer at the peak of his powers... The book takes us from the first to the seventh circles of hell, from Salinger to De Sade' Will Self

''The Informers' is spare, austere, elegantly designed, telling in detail, coolly ferocious, sardonic in its humor; every vestige of authorial sentiment is expunged' 'New York Times'

'A spare and hypnotic prose style which beats out these lives of quiet desperation with a slow pulse as gentle as it is compelling... Ellis has been compared to Fitzgerald and here we see why' 'Modern Review'

"The Informers" have an interesting structure as a whole. It starts with simple sketches of life situations, but as the book goes the stories start to get darker. There are more and more mentions of vampires and near the end you get some more heavy stories about a dying girl, a child-killer and a vampire, who narrates one of the stories.

When a cast of vacuous, narcissistic, bronzed Californians indulges in whatever brings them pleasure, Bret Easton Ellis is at his sardonic, cynical best. Culled from sketches begun in 1983 and eventually filling several notebooks, "The Informers" is more a tale of a group's flawed response to its culture than it is a picture of individuals.

Impossibly empty, the characters are predominantly male students who spend little time at their studies. Flouting their parents' check books, they drive expensive cars, wear extravagantly priced clothes, dine at the trendiest spots, and indulge in most forms of chemical escapism.

Punctuated with dark metaphors, the author's text is hauntingly spare, offering no explanation for the characters' lives but simply presenting them. This leaves the readers to judge, gnash their teeth or gape in shocked surprise.

The are three main characters that the short stories are mainly based around and the shorts in this book range over a time period of roughly two to three years, putting you before and after major events.

This book is something only Ellis could achieve. Taking normal lives of teens and adults alike and showing us their rich, corrupt and disappointing lives.