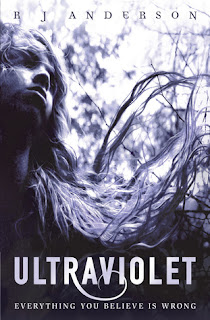 Sixteen-year-old Alison has been sectioned in a mental institute for teens, having murdered the most perfect and popular girl at school. But the case is a mystery: nobody has been found, and Alison's condition is proving difficult to diagnose. Alison herself can't explain what happened: one minute she was fighting with Tori, and the next she disintegrated. But that's impossible... Right?

Ultraviolet" is about a young girls death. I'm going to try to avoid spoilers as much as possible here, but the story revolves around Alison, the top suspect in the disappearance of Tori Beaugrand, who Alison thinks she killed. Most of the story takes place in Pine Hills, a psychiatric institution for young people.

After Tori Beaugrand goes missing, Alison becomes the main suspect as she was the last one to see her. There's video evidence of a fight. There's blood from her ring that matches Tori's. But there's no body. And what Alison remembers doesn't make sense. Until she meets Faraday, a young man who poses as a scientist to get closer to Alison, meeting with her during daily sessions for research. It's Faraday that informs Alison of her condition - synaesthesia.

After finding out she has synaesthesia, which is why her perceptions are unusual - something her mother blamed on mental illness (but synaesthesia is not a mental illness, it's a neurological condition) - Alison begins to understand that she isn't crazy. The thing I loved the most about this book was the descriptions of how Alison saw the world with her condition. I imagined it to be like a comic book, full of bright colours and fireworks. A pretty cool super-power that I don’t think she took advantage of. Anyway, a bit that I really liked was the part where Alison was younger and she was watching her mother do the dishes and, when she heard the clink of the cutlery together, she saw stars

When Kirk, a fellow patient at Pine Hills, does some digging on Faraday and finds out that he isn't who he says he is, Alison's sessions with Faraday are terminated and he is banned from returning to Pine Hills. But on a trip home, she contacts him for answers...answers that will change everything.

The plot was solid and left the reader to catch up to the mystery surrounding her classmate's death. I really enjoyed that because it added to the suspense.