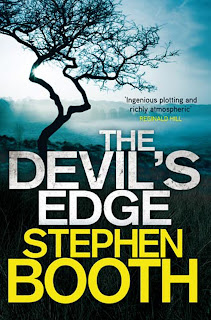 The Devil's Edge finds Cooper and Fry investigating a series of terrifying and lethal home invasions in the Peak District. After Cooper's brother shoots a burglar, Fry takes the reins, and Cooper must watch his rival pursue the case to its bitter end, even as he unearths evidence linking the crimes to the nearby city of Sheffield.

Stephen Booth is the internationally bestselling, CWA Dagger-winning author of ten acclaimed thrillers featuring Cooper and Fry. The series is in development as a TV programme. Booth lives in Nottingham.

The Devil’s Edge is a murder story set in the Peak District, and the countryside is alive with myths and foreboding. It also features Booth's regular detectives, Diane Fry and Ben Copper, with Cooper to the fore here. He is engaged to be married and his brother gets into serious trouble, and through his personal crises we get a good insight into a decent man doing a haunting job.

DC Ben Cooper is called to a house that has been burgled, two bodies are found and it looks like a notorious gang called "The Savages" have struck again. But not is all as it seems, and the villagers of Riddings have secrets to hide.

Meanwhile, DS Diane Fry is skulking around after being politely asked to leave the tedious workshop she had been banished to. A male colleague got fanciful ideas and ended up injuring himself when he fell onto the bonnet of his car. Either way, Fry is unhappy to be back at E Division and within sight of DS Cooper – and matters only get dicier when she is called on to act as liaison on a case of farmer-shoots-would-be-burglar-in-the-back. That the farmer concerned is DS Cooper’s brother is enough to re-establish the tension between them.

Booth reduces the idyllic village of Riddings to a dark, distrusting nest of adders; and each resident seemingly having the capacity, motive and opportunity to kill each other. The omnipresent overhang known as Devil’s Edge that casts its shadow over the neighbourhood affects a foreboding atmosphere; with the ever encroaching wildness of nature being futilely kept at bay by onerously landscaped gardens. You sense humanity’s desire to be perceived as civilised; whereas, in reality, we all submit to our primitive instincts: murder being one of them.

If you like crime novels in the style of Agatha Christie, then you’ll love this book.