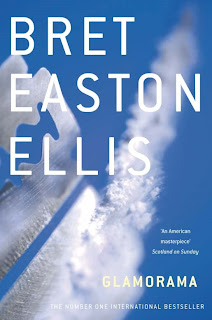 A young man in what is recognizably fashion and celebrity obsessed New York is gradually and imperceptibly drawn into a shadowy looking-glass of that society and then finds himself trapped on the other side, in a much darker place where fame and terrorism and family and politics are inextricably linked and sometimes indistinguishable. At once implicated and horror-stricken, he finds his ways of escape are blocked at every turn.

Celebrity fashion models become terrorists. Photographs and appearances in the gossip columns of the world’s major newspapers begin to replace reality. Sex and drugs are consumed in mass quantities. Bombs go off. Celebrities die horrific deaths, told in a cold, obsessively detailed manner. It can definitely be described as "Zoolander" meets "Fight Club."

The main character, Victor Ward is a male model that spends the first 200 pages going to night clubs and hanging with tons of equally vacant celebrities. Ellis's style makes this all pretty funny, but then the book takes a total 180, and Victor gets pulled into a world of model terrorists and loses sense of who's who and what's what in a haze of sex and violence.

It goes without saying that this book is amazingly written, displaying a kind of literary genius that actually freaks me out in its ability to create a universe so complete there is NO way this could come out of one man's mind.