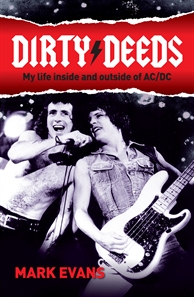 An honest, revealing and sometimes laugh-out-loud memoir of one of Oz music's noisiest quiet achievers - Mark Evans, the original bass player from AC/DC. A must for any AC/DC fan.

A few days after his 19th birthday, rock and roll lover and bass player Mark Evans wandered into his local to check out the band - and his life would never be the same again. Two days later he was playing his first show as bass player with AC/DC; within a week he was on Countdown, rocking out next to wildman Bon Scott, who was dressed as a pigtailed, cigarette-smoking schoolgirl - and waving a mallet - and Angus who was - of course - decked out as a schoolboy. And all for the princely wage of $60 a week!

Then came nearly being burnt alive on the video shoot for 'Jailbreak', and working with legends Vanda and Young on the massive album TNT, on which Mark's take-no-prisoners basslines anchored such immortal hits as 'TNT' and 'It's a Long Way To the Top'. Within a year, the band had relocated to London and were on the road to rock 'n' roll stardom, living the life of rock gods and making the most of all that had to offer. Until the tragic death of his good friend Bon Scott changed everything.

Dirty Deeds is the first book about AC/DC written from the inside, by an insider - which is gold for any AC/DC fan. It is an honest, gripping, sometimes laugh-out-loud account of a band that lived fast, played hard and broke every one of the rules - before they broke all the records. It is also a revealing and frank memoir of a man who's had to contend with everything life has thrown at him - a rough-as-guts upbringing, lucky breaks and soaring highs, as well as terrible personal tragedy and loss. The hard lessons Mark has learned along the way will inspire any reader.

Mark Evans is the original bass player from AC/DC. He was part of the line-up that featured legendary vocalist Bon Scott. This period of the band's history yielded the landmark albums Dirty Deeds Done Dirt Cheap, TNT and Let There Be Rock, and spawned their signature tracks 'Jailbreak', 'TNT' and 'It's a Long Way to the Top'. Mark was based in London with AC/DC, recording and touring extensively. His distinctive bass can be heard on some thirty million albums across the globe. He currently plays as part of the blues duo Dave Tice & Mark Evans. markevansblues.com

Dirty Deeds is an interesting read from the perspective of a founding member of a band that was successful, then skyrocketed after his departure. With a wild reputation of hell raisers and hooligans, Evans has some pretty outrageous stories from his time with this Iconic Aussie band.

These sort of books are a real eye-opener to the hard life that some people have to endure, and sometimes overcome, and other times, succumb to. I’ve often wondered how people who were the member of a successful band came to terms with obscurity after such a high life. Reading Dirty Deeds five you a bit of a behind the scenes look at the life of a rocker who has been on such a roller coaster.

This book was an informative read and I highly recommend it for any ACCA DACCA fan.