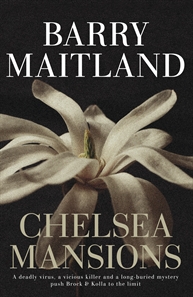 A deadly virus, a vicious killer and a long-buried mystery push Brock & Kolla to the limit.

When Nancy Haynes, an elderly American tourist, is brutally murdered in a seemingly senseless attack after visiting the Chelsea Flower Show, DI Kathy Kolla suspects there is more to the case than first appears. When another occupant of the palatial Chelsea Mansions is murdered hot on the heels of the first - but this time a Russian oligarch - everybody wants to get involved.

Is it a Litvinenko-style KGB assassination? The spooks muscling in certainly think so. Are the murders linked? Or is Nancy's death just the result of mistaken identity? Kathy is determined to dig deeper, but comes up against walls of silence. If she persists, does she risk her career - and possibly more? DCI Brock, meanwhile, faces the fight of his life as his past comes back to haunt him.

A crime long buried, a deadly African virus, and some of the most resourceful criminals Brock and Kolla have ever faced, conspire to make this Maitland's best mystery yet.

Barry Maitland was born in Scotland and brought up in London. After studying architecture at Cambridge, he practised and taught in the UK before moving to Australia where he was Professor of Architecture at the University of Newcastle. He has since retired from the university to pursue his writing. Maitland's first mystery The Marx Sisters was a nominee for the John Creasey award for Best First Novel and The Malcontenta won the Ned Kelly Award for Best Crime Fiction. Bright Air, Maitland's first crime novel set in Australia was published in 2008. Chelsea Mansion is his eleventh Brock and Kolla mystery.

CHELSEA MANSIONS is the ninth Brock and Kolla book from Barry Maitland, and in the last book there were hints that there is a little viewpoint modification going on. It's always particularly interesting to watch how various authors move their long-term characters in and out of the limelight, particularly when you have an inherent seniority built in, as you have in a police pairing.

The story starts off where and elderly American tourist, Nancy Haynes,is brutally murdered in a seemingly senseless attack after visiting the Chelsea Flower Show.

DI Kathy Kolla suspects there is more to the case than first appears, which is always a good start to a thrilling crime story. When another occupant of the palatial Chelsea Mansions is murdered hot on the heels of the first – but this time a Russian oligarch – everybody wants to get involved. This is where the story starts to really kick off and the questions start to fly through the readers mind.

There are enough twists and turns to keep the reader on the edge of their seat for the duration of the story.