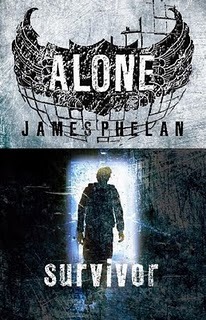 After the stunning twist at the end of book 1, SURVIVOR, Jesse finds himself truly alone. The military personnel he meets are guarded - but it seems likely that safety lies just outside the battered city. When Jesse meets three very different fellow teens, he is offered a badly needed sense of community. But will Felicity, Jesse and Rachel help him escape and return home, or will he be trapped indefinitely - and always within reach of the merciless, contaminated Chasers?

This book follows on almost immediately after Chasers. I read it in a day. Jesse finds survivors in this one and discovers a few things about the Chasers as well.

In all zombie/post apocalyptic books there is a "safe" area. Somewhere where the contagion or problem is less if not completely absent. This is what Jesse wants to find. He wants a way home.

The way Survivor is written gives you a chance to mourn and come to grips with the loss of his friends at the same time Jesse does, which is great because that revelation was quite the shell shocking kind if you didn’t see it coming.

There’s also no loss in pace and I think given that it is written in first person helps it along quite a lot. There’s the idea that you miss out on so much of what is going on in the background when a story is written in first person, that only knowing what one character knows is a hindrance to the story, but I liked being able to learn what Jesse did when he did and still being left in the dark on a greater scale. It’s not a hindrance to the pace and story, it’s not done in a frustrating way, and for me it helped to add to the mystery of what was going on.