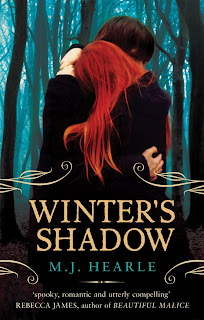 But Blake isn't all that he seems. There is strangeness about him, something dark and otherworldly. Something dangerous. In his attic is a secret he would kill to defend, but Winter seems to have a special ability to make him forget his duty. And he is her only protection against the gathering darkness.

The only problem is, to protect Winter; Blake must risk exposing her to an even greater danger. Himself.

Winter's life changed the moment she first saw Blake Duchamp. Not that she was aware of it. The only thing that Winter was aware of was his physical perfection and those hypnotic green eyes of his that shown with their own magical light. That and his other-worldly charm.

Winter was your typical shy girl. She had insecurities about her looks and purposely made herself "invisible" by having a shining star for her best friend. She knew that she was often thought of as "that girl who hangs with Jasmine", and was just fine with that. I thought it wonderful that she was so self aware. She recognized her faults. She also recognized the faults of others and considered them part of their personalities. Whether it is Jasmine's daily dramas in her self-centred little world or her sister Lucy's stickybeakishness. She was wise for her young age.

Thus Winter's Shadow is not your run-of-the-mill paranormal romance: Hearle gives far more credit to his younger readers, and his refusal to patronise them with predictable plot devices, dumb action sequences and contrived love stories shines through, setting Hearle apart from his contemporaries and engendering a sense of endearment between author and reader.

Look forward to the next book in this great new series.