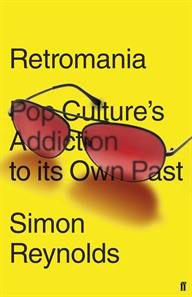 Could it be that the greatest danger to the future of our music culture is ... its past?

We live in a pop age gone loco for retro and crazy for commemoration. Band re-formations and reunion tours, expanded reissues of classic albums and outtake-crammed box sets, remakes and sequels, tribute albums and mash-ups . . . But what happens when we run out of past? Are we heading toward a sort of cultural-ecological catastrophe, where the archival stream of pop history has been exhausted?

Simon Reynolds, one of the finest music writers of his generation, argues that we have indeed reached a tipping point and that although earlier eras had their own obsessions with antiquity - the Renaissance with its admiration for Roman and Greek classicism, the Gothic movement's invocations of medievalism - never has there been a society so obsessed with the cultural artifacts of its own immediate past.

Retromania is the first book to examine the retro industry and ask the question: Is this retromania a death knell for any originality and distinctiveness of our own?

Simon Reynolds is the author of Energy Flash: A Journey through Rave Music and Dance Culture, Blissed Out: The Raptures of Rock, The Sex Revolts: Gender, Rebellions and Rock and Roll (co-written with Joy Press), Rip it Up and Start Again: Postpunk 1978 - 1984 and, most recently, Bring the Noise: Twenty Years of Hip Hop and Hip Rock.

Reynolds writes a music history and at the same time a philophical essay on the themes of this age. For that his theories are too light and too easy. And next to that he puts in his own experiences as a music lover and collector. The crowning achievement of Retromania is that it in no way contributes to the cultural malaise it critiques. If anyone can make sense of pop music’s steady mutation from what George Melly noted as its ‘worship of the present,’ to its current status as a living heritage industry where past, present and what the author calls a nostalgia for a lost future coexist, then you’d have to trust Reynolds. He’s a top-table critic whose keen ear is matched by a sharp eye for cultural context

Retromania describes a pop ecology festering with reissues of late-70s German synth-wave, 28-CD box sets of Sun Ra club residencies, bands such as the Sex Pistols and the New York Dolls reforming, Sonic Youth playing shows in which they perform old albums in their entirety.

Retromania is the first book to examine the retro industry and ask the question: Is this retromania a death knell for any originality and distinctiveness of our own?