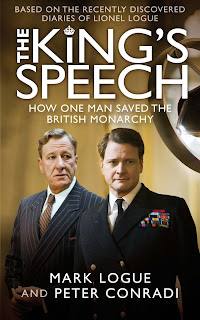 One man saved the British Royal Family in the first decades of the 20th century – amazingly he was an almost unknown, and certainly unqualified, speech therapist called Lionel Logue, whom one newspaper in the 1930s famously dubbed The Quack who saved a King. Logue wasn't a British aristocrat or even an Englishman – he was a commoner and an Australian to boot. Nevertheless it was the outgoing, amiable Logue who single-handedly turned the famously nervous, tongue-tied, Duke of York into the man who was capable of becoming King. Had Logue not saved Bertie (as the man who was to become King George VI was always known) from his debilitating stammer, and pathological nervousness in front of a crowd or microphone, then it is almost certain that the House of Windsor would have collapsed.

The King's Speech is the previously untold story of the extraordinary relationship between Logue and the haunted young man who became King George VI, drawn from Logue's unpublished personal diaries. They throw extraordinary light on the intimacy of the two men – and the vital role the King's wife, the late Queen Elizabeth, the Queen Mother, played in bringing them together to save her husband's reputation and his career as King.

Firstly, the book is not a screenplay for the film, nor is it simply a biography of Lionel Logue, C.V.O., the Australian speech therapist who helped King George VI overcome his speech difficulties and became a loyal and valued friend in the process. The book seems to have been devised at the same time as the film, but entirely separately from it, although the former is undoubtedly basking in the glory and publicity afforded by the film, which is has already won numerous awards and is being tipped to win several Oscars – as indeed it ought. But, the book, written by Lionel Logue’s grandson Mark Logue and Peter Conradi an established author is an entirely free-standing work, and thoroughly worthwhile to read.

Although in scope it follows the film, it deals with the earlier periods of both King’s and therapist’s lives, and follows them to the ends of their lives, in 1952 and 1953 respectively, whereas the film climaxed (and ended) with the King’s great speech of 1945, on the eve of World War Two. That His Late Majesty went on to make many more speeches, one of which in particular has become more famous than the eponymous speech, his Christmas broadcast of 1945, which included the famous words, “And I said to the man who stood at the gate of the year….”, is lost in the film, but covered in the book. And rightly so, since that broadcast speech is probably much more famous nowadays.