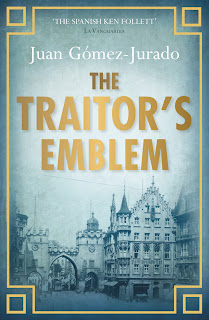 1940. In the heart of a storm at sea, Captain Gonzalez rescues a group of German castaways. When the storm subsides, their leader gratefully offers the captain a strange-looking emblem made of gold and diamonds, in exchange for safe passage to the coast of Portugal. Decades later, in 2002, the son of captain Gonzalez will receive a substantial offer for the emblem. He will not sell it, but he will learn from the buyer the astounding story behind this mysterious object...

Munich, 1919. After his family falls into disgrace, 15-year-old Paul Reiner and his mother work as servants in the palace of Baron Von Schroeder. Full of despair, Paul dreams of the heroic father he never knew. Paul's father didn't die in the First World War, as he had always been told. He was killed by someone very close to him. This discovery turns Paul's world upside down and from that moment, Paul sacrifices everything to discover the truth behind his father's death.

Juan Gomez-Jurado is an award-winning journalist and bestselling author. His debut novel, GOD'S SPY, was an instant bestseller, with rights sold in 42 countries. THE TRAITOR'S EMBLEM won Spain's second biggest literary award, the Premio de Novela Ciudad de Torrevieja. He lives in Spain with his wife and two children.

This book is set mainly in the period leading up to WW11, most of the events taking place in Munich. It concerns two boys as they grow into men. Jürgen, the son of a baron, is a nasty piece of work who becomes a dedicated follower of Adolf Hitler. He ends up in the SS working under Reinhard Heydrich with Adolf Eichmann as a colleague. He is violent by nature and so well suited to his role in the SS, where he is given the task of infiltrating Masonic Lodges. Heydrich wants lists of members, intending to have them disposed of. (As the author tells us, Heydrich was famous for his extensive, and deadly, card-index system).

The book opens with a tantalising prologue of a storm at sea in 1940, from which four enigmatic Germans are rescued from drowning. One of the saved – a man with only one eye – imparts a departing gift to their valiant Spanish saviours – a solid gold and diamond emblem. It’s the story behind this mysterious man and his priceless but sinister gift that forms the rest of the narrative. The identity of the one-eyed man remains a puzzle until very late in the book, and turns out to be an astonishingly clever twist in a plot full of delightfully clever surprises.

This is a great story, the backdrop of events such as the "Beer Hall Putsch", the assassination of Walter Rathenau, the economic disaster of the hyperinflation that shortly followed and the general despair based on unemployment in Germany lends it an element of high accuracy. The first sentence of the jacket blurb states that it is based on a true story and that claim is believable. This story is bizarre, but many of the stories that are told about German Jews that survived the war have an air of unreality about them.

The story is dark in places, sons paying for the sins of their fathers and sinning themselves, some quite graphic violence but it is a page turner that keeps you immersed, the characters are well developed, the style is good but I do wonder if it has lost a fraction in translation
Posted by Scott Wilson at 3:07 AM