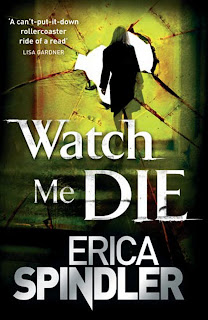 After years of pain and turmoil, stained glass restoration expert Mira Gallier is on the verge of having it all - again. But her perfect life, like the magnificent windows blown to bits by Hurricane Katrina, is about to be shattered. Mira wakes in the night to the scent of her dead husband's aftershave; catches a glimpse of him in a crowd; senses his presence; hears his voice. Could Jeffery, swept away by Katrina's flood waters, still be alive

Then Mira's business partner is brutally murdered, her nude body found posed in the dappled coloured light of the magnificent Mary Magdalene window. As evidence mounts against her, Mira must prove she's neither a murderer nor losing her grip on sanity - and escape a psychopath who will stop at nothing until he possesses her, body and soul.

Raised in Rockford, Illinois, New York Times bestselling author Erica Spindler went to university in New Orleans, where she now lives with her husband and two sons. She has won several awards for her fiction in the US and her books have been turned into graphic novels and a daytime drama in Japan.

Watch Me Die is a thrilling, fast-paced crime novel that will keep you on the edge of your seat from page one to the dramatic finale. The book is about cyclone Katrina and thought it is in the past the devastation left behind is still affecting many lives. And there may be psychopath loose with a victim in sight. Mira Gallier is a stain glass artist, who lost her husband during Katrina. She has had a tough time putting her life back together after losing the love of her life, Jeff. She has thrown herself into her work and an occasional Xanax.

The main character in this suspense thriller is Mira Gallier who is a stained glass artist. Mira is working on rebuilding her life after losing her beloved husband Jeff Gallier during the tragic Hurricane Katrina. The story takes place six years after Mira’s loss and it has taken a lot of hard work and therapy to get her where she is now. Mira seems to still be on the fence about moving forward and or trying to hold on to the past. Then all of sudden her world seems to crumble all over again. Evil seems to rear its ugly head everywhere...especially on Mira’s doorstep. An old but very dear friend, Conner, returns to Mira’s life which is difficult for Mira but he plays a key role and tries to explain to Mira that her life may not have been what she believed it to be. BUT people are being killed...one by one...and each one seems to be attached to a biblical saying. No one is certain as to whether Mira is the true victim or the pure evil that is causing all these deaths. In true Erica Spindler fashion, as soon as you think you know the UNSUB she twists it up leaving you wondering until the very end!