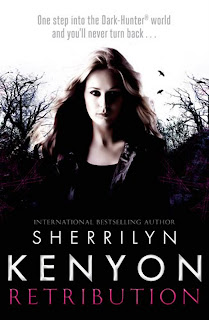 From No.1 NEW YORK TIMES bestseller Sherrilyn Kenyon comes the next blockbuster in her Dark-Hunter series...a world where nothing will ever be the same again.

Hired gunslinger William Jessup Brady lived his life with one foot in the grave - until the day he finally found a reason to live. In one single act of brutal betrayal, he lost everything, including his life. Brought back by a Greek goddess to be one of her Dark-Hunters, he gave his immortal soul for vengeance and swore he'd spend eternity protecting the humans he'd once considered prey.

Orphaned as a toddler, Abigail Yager was taken in by a family of vampires and raised with one belief: Dark-Hunters are the evil who prey on both their people and mankind, and they must all be destroyed.

Brought together by an angry god and chased by ancient enemies out to kill them both, William and Abigail must find a way to overcome their mutual hatred or watch as one of the darkest of powers rises and kills both the races they've sworn to protect.

Writing as Sherrilyn Kenyon and Kinley MacGregor, she is award-winning author of several series: the Dark-Hunters; Dream-Hunters, Lords of Avalon; League, Belador and Chronicles of Nick. She lives with her husband and three sons in Nashville, Tennessee.

The latest Dark Hunter fantasy is as fabulous as its numerous predecessors due to the seemingly star-crossed lovers. From the Greek Pantheon of the gods, Jess and Abigail must fight essences so much stronger than either of them, but love binds them to a more powerful level. She brings out the best in him while his willingness to die eternally for her encourages her to be even better of a person. They make Retribution an enthralling spellbinder.

Retribution was just another prime example of why I love the Dark Hunter series so much. There are a great many series that I have read that got to the point and I have been `eh' and dropped them away and never picked up another book again. I have yet to even feel that urge for the Dark Hunter Series. Sherrilyn does an excellent job at taking a very troubled past and making the characters learn from it more than dwell on the fact they made mistakes. Yes, they know that there is a huge possibility that they may be suffering because they did horrible things, but they manage to understand all the things that they have done that is wrong. They accept and they move forward. Dark Hunters live forever, if they immersed themselves in there torment, like a lot of the fine Dark Hunters have, they miss something so essential. They lose the ability to love.

Overall a great new book that Kenyon fans will love. If you've read all of this series, it won't disappoint, if you're new to the dark-hunter world.... I suggest to all new Kenyon fans to start at the beginning. But if you want to start with RETRIBUTION you won't be left completely in the dark with back stories.