Scott: Thank you so much taking the time to chat with us here at The Fringe magazine. I’ve recently finished reading your latest book, Spellbound and thoroughly enjoyed it. How has it been received in the market to date?

Kelley: So far, it’s been doing well. It hit the New York Times, the London Times and the Globe & Mail (Canada) bestseller lists. While that’s always nice, what’s more important is reader response. They’re pleased with the return of all their old characters, though perhaps a little frustrated that the plot didn’t end…which is to be expected because it is the penultimate book in the series, launching a final plot that needed more than one book to tell.
Scott: When you wrote Bitten back in 2001, did you see the series continuing on a decade and twelve books later?
Kelley: No. Bitten was written as a standalone. Shortly before it came out, I was persuaded that it could be turned into a series, but at that point I envisioned about six books at most! It was only once I reached six—very quickly it seemed—that I extended my plan to a 13 book series.

Scott: What is the most challenging thing about writing a series like the Women of the Otherworld series?

Kelley: With a long running series, I think it’s very tempting to want to satisfy everyone, which no writer can do. I think it’s also tempting to look at what sells well and try to duplicate it. But I truly love story-telling, which means I want to tell my own stories. I do listen to what my readers ask for, but ultimately, I have to make the choices that are right for my series and hope readers follow me on the journey.

Scott: Who is your favourite character/s in the Women of the Otherworld series and why?

Kelley: I don't have a favourite, but some are easier to write than others. My werewolf, Elena Michaels, is the easiest because I've written the most from her point of view. Because she was the first, she was also the most relatable one for me—I made her my age, from my geographic area, with my education level and so on. She’s definitely not me, but I can relate to those aspects of the character. 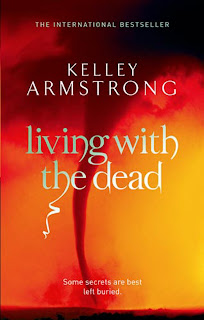 Scott: How hard is it picking up the storyline in each of the series you write? It must be confusing to remember which world and characters are in The Nadia series, The Darkest Powers series and the Women of the Otherworld series.

Kelley: I have a series bible that helps me keep track. I also have a team of regular readers who get the book early—my beta readers—and they help find errors. With such a huge world and cast of characters, it’s hard to remember all the details, but I do hate making mistakes. Right now, I’m planning to write a third Nadia, but it’s been 5 years since I wrote the last, which means I’m very out of practice. I’m actually rereading the first two now to reacquaint myself with that world. It feels strange reading my own books on the airplane!

Kelley: I'm lucky enough to be able to write full-time, and it's a good thing, because it's more than a 40 hour a week job! A typical writing day starts at about 5:30. I write until I get my kids up, then after they leave, I continue writing into the early afternoon and spend the rest of the afternoon doing business stuff. If I’m in “first draft mode,” my weekly writing goal is 10,000 words.

Kelley: My process is constantly evolving. Being published means having a schedule, so it's become very important to learn what methods work best for me. I've discovered I work best from an outline. My finished novel never completely follows the outline, though, because, better ideas arise during the first draft and I follow them wherever they lead. The first draft is a very fast process for me, so if things come up that I haven’t researched yet, I do leave them until later…unless they’re critical to the story.

Kelley: Right now I’m reading my Nadia books, but that’s work, so it doesn’t lend much insight into my tastes. I’m hoping to pick up the latest Jeffrey Deaver novel at the airport. I believe I saw a new one out while touring, so that’s what I’ll likely grab.

Five favourites? Pride & Prejudice, Watership Down, The Shining, Anne of Green Gables and The Vampire Lestat. Those last two really don’t go together, do they?

Kelley: That’s a tough question to answer. While I’d love to have a few hours to pick the brains of favourite authors, I’m not sure they’d be my choices for desert island companions. Being terribly practical, I’d pick five author friends, preferably those I know would help me get off the island  That’s not the answer you wanted, is it? Sorry!