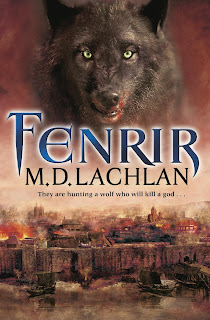 The second volume of one of the most critically acclaimed fantasies of recent years.

His conscience demands one thing, the demands of state another. The Count and the church are relying on the living saint, the blind and crippled Jehan of St Germain, to enlist the aid of God and resolve the situation for them. But the Vikings have their own gods. And outside their camp a terrifying brother and sister, priests of Odin, have their own agenda.

The first book in this series, Wolfsangel, is essential reading to full appreciate Fenrir. The story begun in WoIfsangel is continued in Fenrir in the brilliant historical fantasy intertwined with Nordic mythology. Fenrir faces moral dilemmas surrounding his inner wolf, which make his character very intriguing and complex.

The story is quite interesting, bringing elements of mythology and history together like a well blended coffee. I found the experience of reading the vivid settings to be an absolute delight. The dual transformation of the confessor, the clever deceit that never was is two of the elements of this book that keep the reader fully engaged from the first page to the last. The pace of Fenrir was just as rapid as Wolfsangel, making it a quick read.

Can’t wait for the next book in this series.
Posted by Scott Wilson at 2:20 AM