BOOK REVIEW: The Rules of Attraction 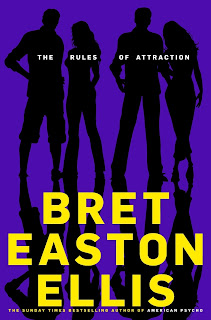 Title: The Rules of Attraction

A startlingly funny, kaleidoscopic novel about three students with no plans for the future – or even the present – who become entangled in a curious romantic triangle

Incisive, controversial and startlingly funny, The Rules of Attraction examines a group of affluent students at a small, self-consciously bohemian, liberal-arts college on America's East Coast.

Lauren, who changes the man in her bed even more often than she changes course, is dating Victor but sleeping with Sean. Sean – cool, ambivalent and deeply cynical – might be in love with Lauren, but he's not going to let that stop him from bedding Paul. Paul, as shrewd as he is passionate, is Lauren's ex-lover and the final point in this curious triangle. This is a breathtaking tale of sex, expectation, desire and frustration.

The Rules of Attraction is more or less an homage to the 80s. It is set at a small liberal arts college (Camden) in New England and centres on three main characters, Lauren, Sean, and Paul, with occasional side character POV used to flesh out the story. The characters are pretty one-dimensional and all share the same basic underlying trait...they are all narcissists.

The characters inspire such mixed feelings of disgust, annoyance, and pity. They're not perfect (far from it) but whenever you think that Sean can't get any more shallow or caustic, or Lauren couldn't be any more self-pitying, or Paul couldn't be more... ok, well, I still love Paul all the way through. The point is, Ellis never lets them become one-dimensional or flat. They're people. Their lifestyles have caused some intense damage on their morals, but underneath it all, they are human. Camden College is an example of Ellis' mastery with setting. It’s so real, every detail is in place, and every character accounted for in some way (in his many other books, characters I barely remembered showed up. I LOVE that). He reminds me of those people that construct miniature scenes in shoeboxes, those painstaking, intensely detailed scenes where even the books in the bookshelf are arranged by subject, or author, or something.

That said, the book itself is quite clever. I can't emphasize enough how much I loved the format, and I'm a sucker for the little precious tricks Ellis employs, such as having a chapter written by the French character written completely in French, or having the book start and stop in mid-sentence. So, if for no other reason, it's worth reading and treasuring for the formatting.