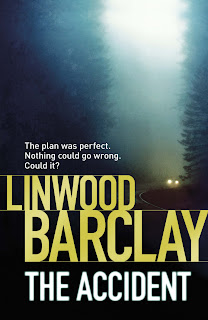 Scott: Thank you so much taking the time to chat with us here at The Fringe magazine. I’ve recently finished reading your latest book, The Accident and thoroughly enjoyed it. How has it been received in the market to date?


Linwood: Very well, thanks. It's getting maybe the best reviews of any book I've written.

Scott: You’ve written a book a year since Bad Move back in 2004. How long does it take you to write, review and edit a book from start to finish?

Linwood: A first draft usually takes me two to three months. Just how good that first draft is determines how much more time I have to spend on it. With No Time for Goodbye, it was only a few more weeks, but The Accident was at least another three months. That book went through several rewrites until we felt we had it just right.

Scott: You seem to have a pretty wicked sense of humour. How hard is it to turn that off when you write your serious detective novels?

Linwood: I don't turn it off, really. Occasionally I have to reel it in a bit. My earlier novels about Zack Walker, who debuted in Bad Move and lasted through three more books, were intended as comic thrillers, but when I got to No Time for Goodbye I went darker. But even that book has its funny moments. When something humourous presents itself, I like to let it happen, unless it seems particularly forced, or too farcical.

Scott: Who is your favorite character from any of your novels and what about them appeals to you the most?

Linwood: It's Patty, from Fear the Worst. She breaks my heart. I think she's my most tragic character.

Scott: You have written four non-fiction books as well as the nine novels. How hard is it switching between writing these two different styles , and do you prefer one over the other?

Linwood: I prefer fiction. Fewer footnotes! But even those non-fiction books were not heavy on research. Two were humour books about family life, one was a satirical book mocking the premier of the province of Ontario (where I live) at the time. And Last Resort (which is, by the way, now available as an ebook after years of being out of print) was my own coming-of-age story, so I kind of knew the material. But fiction is the most fun. You have all the control.

Linwood: I need a hook. I need a way into a story that will really grab the reader. Once I have a hook I like, and have concluded it has the potential for an entire book, I start making notes for a couple of weeks. I need to know the overall story, what my end point will be. But I can't figure out everything that happens along the way before I start writing. It's when I'm into the novel that I see all the opportunities.

Linwood: Right now I am reading Duma Key, by Stephen King. It'll be hard to think of my top five, but here are five that made a strong impression on me: The Chill, by Ross Macdonald. American Pastoral, by Philip Roth. Praise the Human Season, by Don Robertson. The Diviners, by Margaret Laurence, and The Things that Keep Us Here, by Carla Buckley.

Linwood: Yikes. Ross Macdonald and Margaret Laurence, for sure, because I knew both of them. They were mentors, and very generous to me, and have both passed away. The thing is, so many great writers are not necessarily people you'd want to hang around with (although I know many nice ones). And all those egos trapped together on one island -- before long everyone would be trying to kill each other. I'll stick with those two.