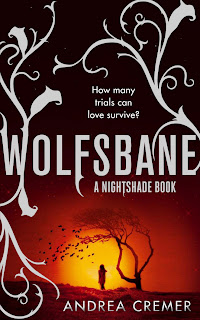 Book two of a stunning paranormal series of forbidden love, destiny and werewolves by an astounding new voice in YA fiction.

You're an alpha, a leader. That's what we need. It's what we've always needed. When Calla Tor wakes up in the lair of the Searchers, her sworn enemies, she's certain her days are numbered. Then the Searchers make her an offer, one that gives her the chance to destroy her former masters and save her pack - and the boy - she left behind. Is Ren worth the price of her freedom Will Shay stand by her side no matter what Now in control of her destiny, Calla must decide which battles are worth fighting and how many trials love can endure.

Andrea Cremer spent her childhood daydreaming while roaming the forests and lakeshores of Northern Wisconsin. She went to school until there wasn't any more school to go to, ending up with a Ph.D. in early modern history - a reflection of her fascination with witchcraft and warfare. She currently lives in Minnesota with her husband, two dogs, and a parakeet.

Wolfsbane is the sequel to Andrea Cremer’s fabulous novel Nightshade. Wolfsbane starts with Calla waking up in the home of her enemy; the Searchers. Believing she is will be killed; she is shocked when she is made an offer. An offer to help the Searchers take down her masters giving her the one thing she's wanted....freedom. After years of being told the Searchers were the enemy, Calla finally learns the truth and now she must faces the choices of choosing her own destiny.

Wolfsbane truly felt like a “Part II”. Yes it picks up where Nightshade left off, but it’s also almost like a completely new story. I loved that!! We’re introduced to new characters (who I instantly took a liking to and I know you will, too) and we’re told new, accurate histories about the Guardians, Searchers and Keepers. It turns out some people have been lying for a very long time, and lying very well. Wolfsbane also had a lot more action than Nightshade. More battles, more casualties. We also get introduced to a few new characters Connor, Monroe, Adne & Ethan, ones that I took and instant liking too. I found them great to read about especially with the banter and jokes between them all.

If you love your paranormal romance then you will enjoy this series.