BOOK REVIEW: The Pillars of the Earth 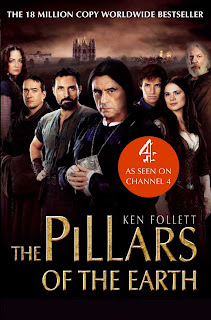 Title: The Pillars of the Earth

The Pillars of the Earth tells the story of Philip, prior of Kingsbridge, a devout and resourceful monk driven to build the greatest Gothic cathedral the world has known... Of Tom, the mason who becomes his architect – a man divided in his soul... Of the beautiful, elusive Lady Aliena, haunted by a secret shame... And of a struggle between good and evil that will turn church against state, and brother against brother.

A spellbinding epic tale of ambition, anarchy, and absolute power set against the sprawling medieval canvas of 12th-century England, this is Ken Follett's historical masterpiece.

This masterful saga of life in twelfth century England is epic storytelling at its best. The author weaves a rich and colourful tapestry of people, places, and events surrounding the building of a magnificent cathedral in the medieval town of Kingsbridge.

Early twelfth century England was a country in a state of flux. King Henry I had died without a male heir. His daughter Maude was to be queen. The English barons, for the most part, however, refused to swear fealty to her. Maude's first cousin, Stephen of Blois, then usurped her rights and proclaimed himself king. This was to plunge England into a civil war that was to last for many, many years, turning England into a virtually lawless and tumultuous land, until Maude's son became King Henry II of England.

For most people, however, life would go on with every day concerns being paramount. The book tells the story of a number of these lives. One story is that of Tom, a master builder, whose lifelong dream was to build a cathedral. The lives of Tom and his family would intersect that of a humble and intelligent monk named Phillip who would become the prior at Kingsbridge Priory. The fates would intervene and provide Tom with an opportunity to pursue his dream.

Their lives would intersect with a number of other individuals, some good, some evil, who would have a great impact on their lives and their goals. Tom would lose his first wife, Agnes, by whom he already had two children, brutish Alfred and sweet Martha, due to complications sustained during the birth of another son. This son was to provide a connection between Tom and Phillip of which Phillip would long be unaware.

The characters were so intertwined I couldn't believe it. And it furthered one of the ideas of the story - to show an epic battle between the forces of good and evil (The "Pillars" of this earth), by showing so many intertwined characters and allowing us to put them into the proper categories (which won't take long!).

The Pillars of the Earth is a novel that demands the reader's full attention, but it is well worth the effort. It is ambitious in its scope and captivates from the very beginning. One burns with the desire to know what will become of Tom Builder, Aliena, Ellen, Jack and prior Philip. Will they succeed in their goals? Are their lives important? The pleasure of contemplating the story as an end in itself is reason enough to recommend Ken Follett's wonderful novel.