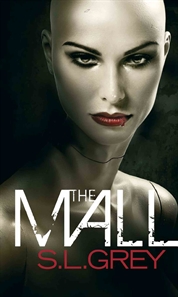 WARNING: will chill your blood, pump your adrenaline, and leave an imprint on your brain. Don't expect any sleep once you've turned the page...

Dan works at a bookstore in a deadly dull shopping mall where nothing ever happens. He's an angsty-emo-kid who sells mid-list books to mid-list people for the minimum wage. He hates his job.

Rhoda has dragged her babysitting charge to the mall so she can meet her dealer and score some coke. Now the kid's run off, and she has two hours to find him. She hates her life.

Rhoda bullies Dan into helping her search, but as they explore the neon-lit corridors behind the mall, disturbing text messages lure them into the bowels of the building, where old mannequins are stored in grave-like piles and raw sewage drips off the ceiling. The only escape is down, and before long Dan and Rhoda is trapped in a service lift listening to head-splitting music. Worst of all, the lift's not stopping at the bottom floor.

Plummeting into the earth, Dan and Rhoda enter a sinister underworld that mirrors their worst fears. Forced to complete a series of twisted tasks to find their way out, they finally emerge into the brightly lit food court, sick with relief at the banal sight of people shopping and eating. But something feels different. Why are the shoppers all pumped full of silicone? Why are the shop assistants chained to their counters? And why is a cafe called McColon's selling lumps of bleeding meat?

Just when they think they've made it back to the mall, they realise their nightmare has only just begun...

S.L. Grey is a mysterious, genderless persona who savours the adrenaline rush of reading and writing cutting-edge horror. In the past, one of S.L. Grey's avatars has re-shelved books in a public library, spent thirteen years in a bookselling chain, and gained an MA in Vampire Fiction. Under a different guise, S.L. Grey has animated horror films, won an award for South African fiction and written a love poem to a zombie...

It's the story of two misanthropes and their descent into an alternate reality shopping hell. Rhoda is a junky, out to score a fix at the local mall, when she loses the kid she's babysitting. Dan is a wage slave at the local bookstore. The two are both cheerfully revolting human beings – Dan is every spineless spoiled emo-brat blaming the world for his troubles, and Rhoda, the scarred and vicious junky is only marginally more likeable. The two unlikely companions are thrown together when Rhoda pretty much kidnaps Dan at knifepoint, and forces him to help her find the kid she lost.

The Mall's strength lies in the fact that like all great novels it can be read on a number of different levels. On the face of it, it's a modern homage to the great 1970s horror movies, part Dawn of the Dead, part Westworld, and part Texas Chainsaw Massacre. But it's also an insightful character study on the moral disintegration of a middle-class teenager. Go deeper still and you'll find a witty satire about modern life, consumerism, body image, identity and social alienation.

The star of the novel is Rhoda, the ultimate anti-heroine. Who better to take on the horrors of consumerism and the fashion world than a tough, scarred, flat-chested drug addict who gets mistaken for a man on page one? Rhoda lights up the page and is far more fun than emo-kid Dan, who narrates alternate chapters with her.

This is thought-provoking, disturbing, inventive and intelligent.