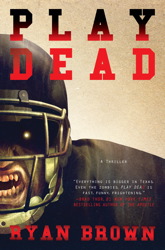 For the first time in Killington High School history, the Jackrabbits football team is one win away from the district championship where it will face its most vicious rival, the Elmwood Heights Badgers. On the way to the game, the Jackrabbits's bus plunges into a river, killing every player except for bad-boy quarterback Cole Logan who is certain the crash was no accident—given that Cole himself was severely injured in a brutal attack by three ski-masked men earlier that day. Bent on payback, Cole turns to a mysterious fan skilled in black magic to resurrect his teammates. But unless the undead Jackrabbits defeat their murderous rival on the field, the team is destined for hell. In a desperate race against time, with only his coach's clever daughter, Savannah Hickman, to assist him, Cole must lead his zombie team to victory

. . . in a final showdown where the stakes aren't just life or death—but damnation or salvation. Boundlessly imaginative and thrillingly satisfying, Play Dead gives small-town Texas an electrifying jolt of the supernatural, and is unquestioningly The Zombie Novel of the Year!

The Comeback Story of the Season .

"Play Dead" by Ryan Brown is a story that is just plain fun.

The author mentioned that he wanted to write a story about the possible effects of steroids,when he saw what was going on with steroids in sports. In this story, he certainly succeeds.

Set in Texas, the story is also a satire about the fanatical following of high school football and the manner in which football can almost take over small town life. This seems particularly true in Texas but is often seen elsewhere.

In this story, the local high school football team, the Killington Jackrabbits, are having their best year and are only one win away from going to the district championships.

The key to the team is quarterback Cole Logan. He's attacked one morning by three steroid using members of the rival team, the hated Elmwood Heights Badgers. Cole ends up having two of his fingers cut off when he refuses to agree to throw the game. However, not thinking clearly, they cut the fingers off of the wrong hand and Cole is still able to throw the ball.

When this doesn't succeed in stopping the Jackrabbits, the members of the Badgers devise a new scheme. The result is that the school bus carrying the Jackribbits has an accident where the bus plunges off a bridge into the water below, killing the entire team, or maybe not.

Both Cole and the coaches daughter, Savanna Hickman are entertaining characters. These high schoolers are drawn to each other in a love-hate relationship that is interesting to see and humorous in the situations in which they find themselves.

`Play Dead' is a book of Southern Gothic brilliance. Even if you don't especially like the idea of a `zombie' novel, the book has a lot more to offer - the story of a football-crazy small town, with a rebel protagonist, an unlikely romance and a game with souls on the line. Ryan Brown is like the male Charlaine Harris - using the dynamic South for a horror backdrop - and `Play Dead' has ensured he is now a supernatural author to watch.