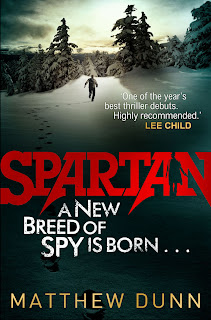 Dynamic, filmic, sensational and authentic. The debut thriller from an author with firsthand experience on the espionage frontline.

At the height of the Iranian revolution a British MI6 agent, James Cochrane, gave his life for his two closest friends - one a fellow British officer, the other a senior CIA operative. Caught in a sting, he chose to walk into the trap set for them so that his friends could escape. The man who set up that sting was then a young Iranian Revolutionary Guard. Today he is better known as Megiddo - the world's most wanted international terrorist mastermind.

Thirty years later, Will Cochrane may work for MI6 but he doesn't enjoy playing by the rules his bosses set him. His controller Alastair knows that Will is a wild card and should be thrown out of the service, but his very unpredictability may be just the weapon the West needs to bring down its most ruthless enemy, particularly when Will discovers that Megiddo was the very man responsible for his own father's horrific death.

Matthew Dunn was trained by SIS in all aspects of intelligence collection and direct action including agent running, deep-cover deployments, small-arms, explosives, military unarmed combat, surveillance, anti-surveillance, counter-surveillance, advanced driving, infiltration and infiltration techniques and covert communications. He used his skills extensively on operations. Although typically he worked alone, but in conducting near seventy missions, he also had significant experience of working with highly-specialized units from the SAS and SBS as well as conducting joint-operations with MI5, GCHQ and the CIA. Medals are never awarded to modern MI6 officers, but Dunn was the recipient of a very rare personal commendation from the Foreign Secretary actions that directly influenced the successful conclusion of a major international incident. He lives in England.

“You’re sure that I won’t be killed today?” The spy rubbed a hand against his smooth face and looked down at the wet Central Park grass beneath him. With an opening line like that you know that you just have to read on to find out what is going to happen. Author Matthew Dunn, has walked the walk and talked the talk, so he knows what really happens in the covert world of the secret services. When MI6, Britain's Secret Intelligence Service, calls in the manuscript of a first-time thriller writer's new book, you know that it's no ordinary thriller. And that the author is no ordinary author. Matthew Dunn spent 5 years as a field operative in SIS recruiting and running agents, planning and participating in special operations and operating deep undercover throughout the world. In SPARTAN, Dunn's explosive debut, he draws on his unique background to breathe dynamic new life into the contemporary spy novel.

While reading Spartan I often wondered how much of Will Cochrane was in fact based on Matt Dunn’s real life experience and how much was fictional. This element was quite unique for this type of novel as you don’t find many spies around that take up the pen and begin a career as an author. The writing was very much in the short style of James Patterson, with rapid fire paragraphs without too much time spent on descriptions. After reading Dunn’s biography, I was hoping for some more detailed descriptions of the techniques used by the secret service, but I suppose MI6 would not have let the book been published if it gave away any of their trade secrets.

The action is quite full on, with enough intrigue and suspense to keep the reader interested throughout the book. I can see this author developing their craft and becoming a very popular author in the future.
Posted by Scott Wilson at 3:02 AM