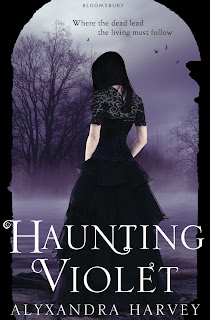 Violet Willoughby doesn’t believe in ghosts. But they believe in her. After spending years participating in her mother’s elaborate ruse as a fraudulent medium, Violet is about as skeptical as they come in all matters supernatural. Now that she is being visited by a very persistent ghost, one who suffered a violent death, Violet can no longer ignore her unique ability. She must figure out what this ghost is trying to communicate, and quickly because the killer is still on the loose.Afraid of ruining her chance to escape her mother’s scheming through an advantageous marriage, Violet must keep her ability secret. The only person who can help her is Colin, a friend she’s known since childhood, and whom she has grown to love. He understands the true Violet, but helping her on this path means they might never be together. Can Violet find a way to help this ghost without ruining her own chance at a future free of lies?

It's too bad that there isn't more historical YA out there these days, especially considering how they could provide the perfect context for ghost stories. Harvey portrays an immersive world of Victorian society and Lords and cultural aspects of days gone by.

Sixteen-year-old Violet Willoughby doesn't believe in the supernatural after being forced to assist her mother, a fradulent medium, since she was a little girl. Violet resents her mother for forcing her to participate in tricking many grieving people out of their money. Invited to the estate of Lord Jasper, a wealthy and prominent Spiritualist, Violet is angry that she must once again help perpetuate her mother's fraud. At the same time, Violet's mother is trying to push her into marriage with a wealthy young man, Xavier, who has been courting Violet. Xavier is kind and handsome, and marriage to him would mean she could finally escape her mother, but she can't seem to feel the same way about him that she does about Colin, the boy she grew up with after her mother took him in to work as her assistant.

Soon after arriving at Lord Jasper's estate, however, Violet learns that her romantic troubles are not her biggest problem. While her mother may be a fraud, ghosts are real - and Violet can suddenly see them. One ghost in particular will not leave her alone - the ghost of Rowena, a young girl Violet's age who died last year in what was apparently an accidental drowning. Rowena was actually murdered, and she will not rest until her murderer is brought to justice. Despite the danger, Violet is determined to solve the mystery so Rowena can finally rest in peace.

Haunting Violet is an enjoyable historical fantasy full of mystery and romance. Though it was rather predictable which of her two love interests Violet would choose, I enjoyed the mystery which kept me guessing until the end. At times the narration and dialogue did seem rather modern for a book set in 1872, but since I don't think it was supposed to be perfectly historically accurate it didn't bother me too much. Overall it was a fun read and I really liked that it was a standalone novel with a satisfying conclusion, which is something I'd like to see more of in young adult fiction, since these days it seems like almost every book is either part of a series or setting up for the possibility of one.
Posted by Scott Wilson at 1:27 AM