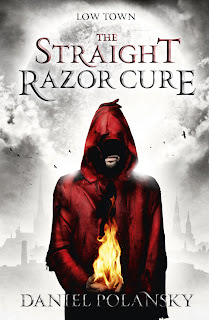 Welcome to Low Town. Here, the criminal is king. The streets are filled with the screeching of fish hags, the cries of swindled merchants, the inviting murmurs of working girls. Here, people can disappear, and the lacklustre efforts of the guard ensure they are never found.

Warden is an ex-soldier who has seen the worst men have to offer; now a narcotics dealer with a rich, bloody past and a way of inviting danger. You'd struggle to find someone with a soul as dark and troubled as his.

But then a missing child, murdered and horribly mutilated, is discovered in an alley.

With a mind as sharp as a blade and an old but powerful friend in the city, he's the only man with a hope of finding the killer.

If the killer doesn't find him first.

Let me start by saying this fantasy novel is not one based on a main character with magical or mystical powers, which the cover may lead you to believe. This is the darkest, most disturbing and unflinching fantasy novel focusing on the criminal underworld that I’ve read. There is humour in The Straight Razor Cure, but it is also on the dark side, and very in keeping with the grim setting and tone, making it feel more like an Elmore Leonard novel.

The main character, Warden, is not a nice guy; he’s an ugly, disgraced soldier and intelligence agent who fell from grace and then made his mark on the city by becoming a drug dealer and crime lord of a city district.

I generally don’t have an issue with swearing, but there were moments where extremely strong swear words and phrases were used for no real reason that I could see and they were scattered with a blunderbuss approach. Sometimes the swearing was not there to highlight a tense scene, or underline a strong emotion, it was just there. The problem was the next time that swear word showed up it had lost its shock value and impact, which would have tied me into the scene and make me feel as shocked as the character.

The story takes place very firmly on the streets of Rigus, a city in the Thirteen Lands, but we never leave its dirty streets and seedy establishments. There might be a wild and wonderful world out there filled with fantastical creatures and other strange beings, but I doubt it fits in with the world Polansky has created. This is a crime novel with an icing of fantasy, where the fantastical elements are almost incidental to the world and the people living in it. Magic is a dangerous and unpredictable weapon, used by a few, and most avoid it because of the risks involved.

Overall this was an intentionally bleak and unpredictable crime novel, set in a fantasy world, where the intriguing story and the mystery kept me going, more than my interest in the main character, who was not very likeable by design.
Posted by Scott Wilson at 3:26 AM