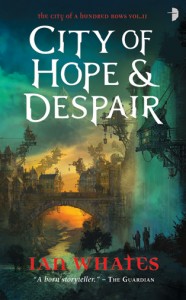 Dark forces are gathering in the shadowy depths, and the whole city is under threat. The former street-nick, Tom, embarks on a journey to discover the source of the great river Thair, said to be the ultimate power behind all of Thaiburley. Accompanying him are the assassin Dewar and the young Thaistess Mildra. It soon becomes evident that their journey has more significance than any of them realise, as past secrets catch up with them and unknown adversaries hunt them... to the death!

City of Hope & Despair essentially starts where City Dreams and Nightmare ends, though it takes a little to get there since the first pages of the book are a sort of extended prologue that seems disconnected from what came before.

Inside Thaiburley nasty things stir and bad things happen, most notably a creature called The Soul Thief - who does precisely what its name says and steals the souls especially of the people with a little "talent" - is on one of its occasional rampages. To add to uncertainty, the city's underground is in flux after the events of the first book and new gangs appear to take place of the decimated older ones

Kat is back with the formidable Tattooed Men, which means she's got to face her sister, the leader of the group which Kat abandoned, and they're facing the Soul Thief, who descends on the City Below every few years and turns several people possessing special talents to husks. It's personal because the Soul Thief stole Kat and Chavver's mother from them. Their vendetta is complicated by an upstart gang called the Fang and a stranger from the East called Brent. This battle was complicated before it even began, and the price of success will be high. As if that wasn't enough, the prime master is investigating a mysterious and implacable new disease called bone flu, which gradually ossifies entire human bodies.

Overall the book moves fast and is a page turner with everything that made City Dreams and Nightmare entertaining, but the trilogy ending which I plan to read asap of course will determine how the series stands