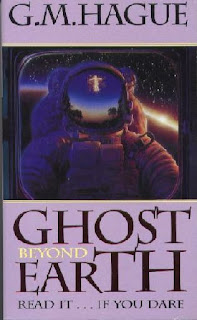 Scott Wilson recently caught up with Australian author Graeme Hague to chat about his writing and why he dropped off the radar in Australian bookstores.

Scott: Hi Graeme, thanks for taking some time out from your busy schedule to have a chat to us. I am a big fan of yours and really enjoyed your first 4 novels, Ghost Beyond Earth, A Place to Fear, Voices of Evil and The Devil’s Numbers. After The Devil’s Numbers you seemed to fall off the radar. Can you tell us what happened,(I was disappointed at the sudden loss of your books on the shelves in Australian bookstores).

Graeme: It was one of those odd, almost inexplicable industry things… but my second book “A Place to Fear” (APF) didn’t sell well due to- as we all seemed to agree in hindsight –a really bad cover, plus the publisher didn’t promote it very much at all expecting it would look after itself on the back of Ghost BE’s successful sales. My third and fourth novels continued to get no support from booksellers, because they based their stock levels on APF figures, too. Pan Macmillan tried several solutions to remedy the problem, but in the end decided they couldn’t justify publishing more Graeme Hague horror. It was a business decision by them and I always regret (and I got quite angry at the time) they didn’t persevere since I’m still enjoying recognition for my horror writing now. It’s strange, but most of my reputation has been built from subsequent “discount” publisher’s releases and overseas exposure. I’m hoping the Ebooks releases will continue that trend, because although I say it myself- they were great stories. Still, the original sales from the original releases weren’t brilliant.

Scott: In The Morning was a very different book from your novels, can you tell us about this and how hard it was to get it published after writing five pieces of fiction prior to this.

Graeme: And In The Morning came from a passion for war stories and writers like Derek Robinson and Herman Wouk (who I’ll admit are poles apart in style). Also, with my horror writing in hiatus, it was an opportunity to write something I really wanted to write and I never expected AITM to see the bookshelves- it was a labour of love. But my agent was instantly very impressed with the early chapters and Jody Lee at Simon and Schuster agreed.

Scott: Out of every book you have written, who is your favourite character and why?

Graeme: It’s a toss-up between Rose from AITM and John Maiden in Missing Pieces, because they’re both characters that needed strong characterization rather than getting by with being a little less “deep” by riding on the wave of the story, if that makes sense (and it probably outrages the ethics of some writers).

Graeme: Hmm… tricky one. I’m still putting beer in the refrigerator by writing freelance articles on recording studio equipment, software, music… so I do a lot of writing every week- maybe five or six hours a day. Which makes it hard to switch into “fiction mode” for other projects. And because I’m so involved in lots of different things being disciplined about novel writing can be difficult. So generally I try to put aside a full day for writing fiction each week and meet a weekly “quota” like that. Having said that, right now I’m not writing anything new at all… I’m editing my previous novels into Ebooks.

Scott: What made you interested in writing and what was the first short story you had published?

Graeme: I always wrote short stories well from early in school. I was never “interested”- writing was something I’d inevitably do, albeit once I got a few other rash ideas like playing in rock bands out the way. Like, I never thought, “I’m interested in being a writer and I’ll give it a try”. It never occurred to me that one day I wouldn’t be doing it. I guess that’s what they call “in the blood”. I wrote several short stories that were never published (and shouldn’t be!) but they showed me how to start, work upon and finish a story. It’s probably worth mentioning that my short stories were written in an era where the market for such fiction was non-existent. Magazines and publishers didn’t touch them and the internet was a myth. Short stories now have a better, if devoted, audience.

Scott: How do you think ebooks have changed the market (if at all) and when can we expect to see your back catalogue of novels released in this format?

Graeme: As I’ve said earlier, I’m working hard to transform all my novels, including several previously-unpublished works, into Ebooks right now. Some new GM Hague horror will be available- books I wrote that publishers didn’t like, because of marketing and publishing policies… not because (I hope!) the stories were poor. Ebooks will radically change the whole industry and much sooner than we all think. Ebooks will be cheaper, more accessible and not have content or availability dictated by publishing “trends” of the like of the Twilight series, etc when suddenly every damned story had to be a teenage vampire tale. The down-side is a quality control issue. Any writer, regardless of their talent (or lack thereof) will be able to release an Ebook on the web, even if it absolutely sucks. The challenge for all good writers, either established or new, will be to create some credibility and a reputation that rises clearly above the crap. It won’t be easy.

Graeme: Sadly, I just gave up on a recent James Herbert novel. I just couldn’t get excited enough about it and finally, after many years, I’ve learned the trick of putting down novels that don’t keep my attention rather than reading them all the way through because of some odd “principle”. Otherwise, I just finished Greg Bears’s “Forge of God”. Love GB’s writing, but I was kind of hoping for something a little more clever than the obvious apocalyptic ending…

Scott: Can you tell us about your musical career? What sort of music do you play and have you released any albums?

Graeme: I’ve written and recorded a lot of original material and I’m going to make it available from my website as the Ebook distribution is put in place, but my main “claim to (musical) fame” is like thousands of other musicians… I play “covers” in pubs and restaurants and basically enjoy the chance to play guitar loud- or soft -, sing my favourite songs, drink beers and get paid for it! Music is like writing- you have to be enormously motivated and blind to all the obstacles to really have a chance at genuine success. I’m fortunate that my writing will allow some exposure for my music- for what that’s worth!

Graeme: Be extremely business-like. Offer them a “product”- something they can sell, including yourself (look at Tara Moss as an example- much as she’ll deny it and argue otherwise, she is as much a marketable product as her books). Research the art of presenting synopsis and story ideas, rather than the manuscript itself. It’s like a “pitch” to the publishers. Of course, you have to follow all that up with an excellent manuscript- and I mean excellent. Getting your MS worked on by a good freelance editor is money well spent, assuming your writing isn’t beyond help in the first place, because a positive “Reader’s Report” from such an editor submitted to a publishing house will be a huge advantage.

Scott: If you were only allowed to own 5 novels, what would they be and why?

Graeme: Now we’re getting tricky… okay- “A Piece of Cake” by Derek Robinson, “Haunted” by James Herbert, “War Cry” by Leon Uris (which I must read again), “Goshawk Squadron” by Derek Robinson (again- sorry) and “Birdsong” by Sebastian Faulks. Not much horror? Horror has to be very, very good to suffer a second reading. Early Stephen King stuff would rate and Koontz’s “Koko” was great, but looking at the tattered copies of long-kept books in my bookshelf…
Scott: Thank you for your time Graeme. Look forward to reading your collection of short stories when it’s released.

Graeme: That collection is in the pipeline to be released as an Ebook very soon. It’s got a great story called “Footprints in the Snow” which at 60,000 words is hardly “short”, but it’s a beauty. Lots of gothic abbeys, ghostly nuns and walking corpses…

Thanks very much for you time Graeme, good luck with your future books. You can find more about Graeme's books here http://www.graemehague.com.au/Published%20Books.html
Posted by Scott Wilson at 1:10 AM