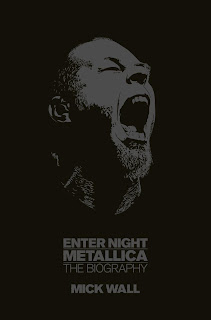 Mick Wall moves on from Led Zeppelin to produce a definitive doorstop on Metallica.
Alongside contemporaries Slayer, Megadeath and Anthrax, Metallica came to prominence in the eighties as one of the 'big four' of thrash metal. Metallica were to thrash, though, what the Sex Pistols were to punk. Nearly thirty years on, their tale is one of alcohol, rule breaking and tragically early death. But allied to that are colossal sales figures for their records - they are the fifth-highest selling recording artists of all time - and members with backgrounds that touch on jazz and classical music. Metallica, in fact, have garnered more critical acclaim than any heavy rock band since Led Zeppelin. Fresh from the critical and commercial success of WHEN GIANTS WALKED THE EARTH, Mick Wall takes a similar informed look at the band, a group he has known on and off since their formation in 1981.

Mick Wall was the founding editor of Classic Rock magazine. He's the author of numerous music titles, including books on Iron Maiden, Don Arden, W. Axl Rose and Black Sabbath. He ghosted XS All Areas: the autobiography of Status Quo and is a former DJ on Capital Radio. In the 1980s he was the chief writer for KERRANG! His most recent book is a biography of Led Zeppelin: WHEN GIANTS WALKED THE EARTH.

Mick Wall writes the most detailed and interesting rock biographies around. I’ve read his previous ones on Iron Maiden and Led Zeppelin and couldn’t wait to pick up a copy of his latest book on Metallica.

Enter Night is written in two main parts, the first being Born to Die about the early years and up until the Master of Puppets album and the tragic death of bass player Cliff Burton. The second part, The Art of Darkness, covering the reinvention of the beast known as ‘tallica from the ...And Justice For All album onwards.

Wall’s research into the history of Metallica is extensive, covering the humble beginnings with McGovern through the Napster incident to their last album, Death Magnetic. At only just only 460 pages, there is a lot of information that the reader is given in a fantastic style of writing Wall has become known for from his previous biographies and articles with Kerrang.

While there are 24 pages of colour photos, there was the lack of album covers and t-shirt art that are synonymous with Metallica and is the only part of the book that disappointed me. The photos of the teenage lads are hilarious, especially the one of a young Kirk with a nerdy hair cut and glasses. If you saw these photos back in the day, there is no way you would have pictured these guys becoming such a driving force in the Metal Music industry.

The section on the early years of Metallica were very interesting and will probably be a real eye opener to some of the younger fans who only started listening from the Load album onwards. Wall’s commentary on the evolution of the bands style and direction is fantastic. I also found the pages about Kirk Hammett to be the best ones I’ve read. Everyone has heard enough from James and Lars over the years and it was great to see more about the silent guitarist who has inspired thousands of teenagers to pick up a six string and hammer out some riffs.

This is definitely worth reading.
Posted by Scott Wilson at 4:12 PM