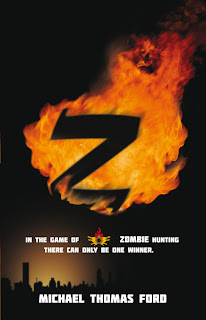 Product Details
ISBN: 9781864718225
Format:Paperback
Imprint:Random House Australia
Published:01/10/10
Subject:Child Fiction : Teenage Reader
In this action-packed thriller, one teenage boy must battle to the death when zombies jump out of the virtual world - and into real life.

Josh is by far the best zombie Torcher around. At least, he is in his virtual-reality zombie-hunting game. Zombies haven’t existed in the real world in more than fifteen years, and the battle to defeat the devastating zombie epidemic is now the stuff of history lessons. Or so it seems.

When Josh accepts a coveted invitation to join an underground gaming league in the dark, forgotten tunnels of the city, he soon realises that hunting zombies is not all fun and games. Real blood is spilling, members of the team are disappearing and the zombies in the game are acting strange. And then there’s the matter of a mysterious drug called Z . . .

This darkly thrilling teen novel will have you holding your breath as you turn every page.


Don’t know what it is, but I seem to be drawn to Zombie books and movies for some unknown reason. Even though the basic plot of most of this genre is the same, virus breaks out, wipes out most of the population turning them into undead, brain munching monsters hell bent on tracking down the few remaining living people and eating them.

Z is an original and great new take on the Zombie genre, combining the elements of the video game generation and horror. The main character, Josh, is a legendary zombie hunter, well in the world of video gaming anyway. When he tries his hand at the new and secret game known as IRL (In Real Life), he falls into a dangerous world very different to the one he was master on the computer.

While written for the YA market and less gory than adult style zombie novels, this is definitely well written and worth a read. It touches on the usual teen issues as well as some good old fashion head hacking and brain bashing.
Posted by Scott Wilson at 8:15 PM