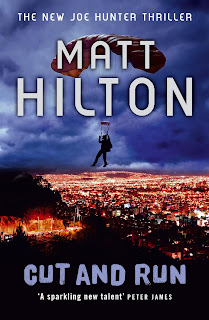 Don't look back or you might find the devil on your heels.
Joe Hunter's devil is Luke Rickard, a killer who has stolen his identity and committed a vicious double murder. His motive? Revenge. His method? A blade. His mission? Kill anyone Hunter holds dear.It is a deadly duel of wits that takes Hunter from the streets of Miami to the squalid barrios of Colombia to the jungle hideaway of a drug baron. And brings him face to face with his past.Revenge is a dish best served cold and Joe needs a cool head if Rickard is not to cut and run.CUT AND RUN the fourth high-octane adventure for Joe Hunter, the man whose mission is to rid the world of bad guys.

Matt Hilton worked for twenty-two years in private security and the police force in Cumbria. He is a 4th Dan blackbelt and coach in Ju-Jitsu. He lives in Cumbria with his wife and son.

Cut and Run is the fourth book in the Joe Hunter series, written by an author who worked for many years in the police force and security industry. I have not read any of Hilton’s previous novels, so I was not sure what to expect in this novel, especially with it being part of an onoing series of stories.

The story is about an ex-military man, Joe Hunter, who has his identity stolen by a serial killer, and that is where the fun begins. Hunter enlists the help of his two closest friends track down the killer and clear his name. Apart from hunting Rickard, Hunter uses all his experience to track down the mastermind behind the attacks.

One of the interesting elements of this novel was the way it has been written in both first person by Joe Hunter, and also in first person by the serial killer, Luke Rickard. Hilton’s use of this technique makes the story extremely interesting and works brilliantly. I haven’t read anything else quite like Cut and Run. The chapters blended well and when Hunter finished describing a scene, Rickard took over immediately at the beginning of the next.
Posted by Scott Wilson at 7:37 PM