The Cleansing by David Macphersion 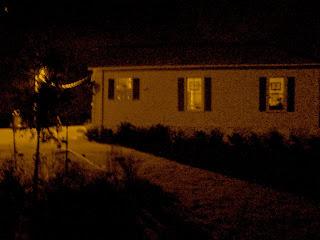 Lights In The Dark by Christopher Woods


"This is the worst human sacrifice I ever been to," Billy said to no one in particular. He changed the angle of the hose to spray a part of the alter still covered in red gristle.

"Ah cool it," Mark said, "You're just peeved because there's a lot of blood today. Who knew the old lady was going to be such a geyser."

Billy turned off the hose and bent down to pick up the bleach bottle. "I don't know if that's it. No, that ain't it. I used to like this part. Sure it’s the job but I used to care about the cleaning. About the return to a pristine state, ya know. Back then, I was all, the more blood the better. But now, it’s just the same ole crap. The cleansing bath, the donning of robes, the encircling, the chanting, the cheerful dancing after the knife. Man, every month. It's like watching reruns of a sitcom you used to like every night because that's the channel you always switch to."

"Wow man, that's some over-rehearsed speechifying, but hey, who am I to say anything about rote chanting." Mark tried not to laugh, but found himself chuckling. "Oh, hey, Billy. I don't mean nothing by it. Just that I don't know if it’s a good time to mention that you missed a severed toe over there, by the sconces. Don't want to bring down your righteous ire with mundane nonsense like evidence left at the scene."

Billy spotted the missing link and scooped it into the refuse bag. "That's a big old sacrilege. Thanks Mark."

Mark turned on the ultra violet to see if they missed any blood residue. "I would love to say I did it for you Billy, but you know, I did it for the group. Not for you. If you don't get that, well, I don't know, just breaks my heart to see you missing why we here in the first place."

Billy sprayed down the spots that glowed under the light and decided to not speak any more. Mark was right, he was not for the group, and he was negative. He was poisoning the group kool-aid, and not in the good way.

It was not long before the place was as it was before, perfect. It was time to go. Billy threw the refuse bags into the furnace and left without saying good-bye to Mark. What was there to say? He went out the side door and reached for his pack of Camels only to recall he didn't smoke no more.

"This was my first time, thanks." A small shadow spoke to him. A moment of acclimation let Billy see the girl in front of him. She was there at the ceremony tonight. He thought he had noticed her.

"I had no idea," the girl said. "I feel new. I feel better. You are the only one who hung around. I just wanted to say thanks."

Billy stopped wanting to smoke. He was being thanked. He was being blessed. "Well, it’s worth it. Just gotta to remember that feeling every now and then, keeps you going."

The girl just smiled at him, having no idea what he was talking about.

Billy could only grin. "Hell let me thank you. You remind me of things I can't believe I could forget. Come on. The night is still night, let's go for a ride."

The girl nodded and said, "To where."

Billy said, "To wherever, just as long as we drive fast, and if the gods are with us, we might hit a pedestrian. Come on, let's go do good works."
Posted by Scott Wilson at 12:08 AM