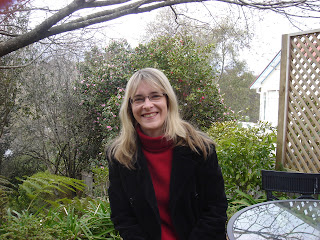 Scott: Thank you so much taking the time to chat with us here at The Fringe magazine. I’ve recently finished reading your latest novel, The Abused Werewolf Rescue Group, and thoroughly enjoyed it. How has it been received it the market to date?


Catherine: I've had a handful of reviews, all of them good (save for one internet blog), but not many website messages as yet. One W.A. reviewer was very canny, picking up at once that the book was really about male adolescence.

Scott: Your novels are aimed at the YA market, but I know many adults that have enjoyed the storylines and humour in your books too. Do you write for a particular age group or try and included elements that span the various ages?

Catherine: Usually my ideas suit particular age groups - I wouldn't have tried to force 'The Reformed Vampire Support Group' onto the 9-to-12-year-old market, for instance - and I tailor my writing towards the age group I've chosen to target. However, if I CAN add layers that will appeal to older readers, I'll do that too. It just makes the final product more satisfying for everyone involved, I think.

Catherine: I try to get at least three or four hours in a day, but it varies, especially on the weekend. The other day I was having fun and must have spent about nine hours writing. Other times I'm lucky to get in an hour or two, what with all the conflicting demands of life. And you're not supposed to sit for hours on your butt. It's bad for you.

Scott: What was the inspiration for The Reformed Vampire Support Group?

Catherine:I was watching a vampire movie that featured some really repulsive vampires (it might have been 'Thirty Days of Night') and it occurred to me how mortifed I would feel if I was a perfectly 'normal' vampire watching that movie - if vampirism was a kind of disease that I'd caught, and yet I had to go through life putting up with that kind of portrayal.

Catherine: I've only written two short stories in my life, and they were published by a long-defunct science fiction magazine published in W.A. - I think it might have been called 'Far Out' - before I ever managed to publish a book. I wrote them specifically for that magazine, after seeing an advertisement. But my main interest has always been novels - I've been writing them (though not selling them) since I was twelve years old.

Scott: Have you been approached about making Evil Genius, Genius Squad, Living Hell or The Reformed Vampire Support Group into movies or a television series? I think the all have great qualities for being turned into this medium.

Catherine: Yes, I have been approached,several times. Nothing's ever come of it, though. I just keep hoping.

Scott: As a writer it is interesting to hear what other writers read in their spare time. It is often surprising to hear the genres and variety of books other authors read. Can you tell us what are you reading at the moment and what you five favourite books are?

Catherine: At the moment I'm reading Barbara Pym's 'Less Than Angels'. I love Barbara Pym. I also love true crime and really GOOD crime fiction (like Kate Atkinson or Ruth Rendell) and high-class journalism - like John Krakhauer, for instance, or Barbara Ehrenreich. Plus I'm a fan of Nick Hornby, Jane Austen, Nancy Mitford and George Orwell, to name a few.

Catherine: Electronic publishing is the future. It's in a state of flux now, so this is the time to get your foot in the door. People are self-publishing and getting picked up by publishing companies on the basis of blog hits. Bloggers are on their way to becoming superstars. Publishers are becoming more and more flustered about what INTERACTIVE e-books might mean; if I had any kind of computer savvy, I'd be thinking about how to stretch the medium and distinguish myself in that field.

Catherine: Are you kidding? I wouldn't want writers at ALL (with the possible exception of my friend Phillip Gwynne, who's a really big, strong, ex-Aussie Rules player, as well as a fisherman and a good conversationalist). I'd want a horticulturalist, a builder, a sailor, a doctor and a cook.

Scott: Thank you very much for your time. I look forward to your next book.
Posted by Scott Wilson at 1:00 AM