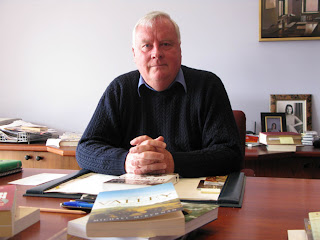 Scott: Thank you very much for taking time out of your busy schedule to have a chat to us at The Fringe Magazine about you latest book and writing in general. I've just finished reading Gallipoli? and thoroughly enjoyed it.

Michael: Thank you Scott. I'm so pleased you like the book. It is getting a very good response from readers.

Scott: The details of how the Australian participation at Gallipoli has long term effects on the families of soldier killed was very moving. What made you so interested in this part of Australia's history and how hard was it to find more intimate details as outlined in your book?

Michael: I have always thought of myself as a social historian interested in the details of the lives of ordinary people. War, I discovered through my PhD and two early books on the homefront gave me the opportunity of following that interest. it gives such immediately accessible information about a range of people who otherwise would never be in history. I suppose one the advantages I bring to the study of Gallipoli is that I have been reading and thinking about it for a very long time. I worked at the Australian War Memorial for about 16 years and Gallipoli, of course, was high on our permanent agenda. In August 1984 we opened a new Gallipoli gallery at the Memorial and invited as many surviving Gallipoli veterans to Canberra as possible. More than 200 came and to sit down with some of these men and hear their stories was a great privilege. That got me interested in the personal and family stories and gave me an awareness that these men had come home and had somehow lived full and fulfilling lives. It was a remarkable experience and shaped the way I thought of history thereafter.

Scott: What was it like the first time you travelled to Gallipoli with Anzac Veterans?

Michael: To travel with veterans back to Gallipoli in 1990 for the 75th anniversary was one of the great highlights of my life. They were very old men by then, of course. But we were together for about ten days all up and the men were very generous with their memories. To hear first hand from a man who had served at Quinn's Post was simply extraordinary and the clarity of his recall was remarkable. I use his first hand account, as told to me, in the book. I must be one of the last Australian historians who can claim that. I spoke to, and included in the book, an account of a British veteran who landed at Suvla in August 1915 and was made blind that first morning. I'll never forget him taking both my hands in his and saying how he wished he had been born Australian because we looked after our victims of war. He was such a lovely old man with awful memories which he had been living with for 75 years. I felt so humble to be with him on his first return visit. There were so many highlights on that trip, such a sense of history, and such a sense of privilege to be there.

Scott: What is it like for an Aussie to visit Gallipoli in the present day? Is there much ill feeling towards Australians because of our part in the war?

Michael: Prime Minister Hawke said on our veterans trip in 1990 that he hoped that every Australian would have the opportunity of visiting Gallipoli. Many have done so in the years since then. But I tell the travellers I take there something a little different. Get away by yourself I tell them and take some time in private and personal reflection. Then you will allow the real spirit of Gallipoli to work on you. For it is a unique place. Sit, for example, in Ari Burnu cemetery looking out to sea and envisage the first Anzacs coming ashore at this very place on 25 April. If you are quiet enough, you can almost hear them. I have very rarely come across any ill-will from the Turkish people. Quite the reverse in fact. They very generously open their country to us. But last year, at the Nek, four or five teenage boys in school uniform started heckling me as I told the story of the awful carnage there. Other Turks told them to shut up, but it was a first for me.

Scott: How did you come to know the story of Jack Fothergill?

Michael: I was asked to write a history of the War Memorial for the 50th anniversary of its opening in November 1991. My own grandfather had lost his two older brothers in France in 1918 and he never had the opportunity of visiting their graves. The War Memorial was meant to be the place where people like my grandfather could come to the AIF's resting place at home, to where their spirit was. The book was called 'Here Is Their Spirit'. I was looking for a quote that would best encapsulate that and a colleague drew my attention to an In Memorian notice in the Melbourne Argus of 25 April 1923: 'if only I could see your grave I would die happy'. It was precisely what I wanted. Years later I thought to myself, 'but if they put a notice in in 1923 they must have had one in in 1922, 1921, etc' So I went over to the National Library and looked at the Argus for 25 April each year since 1916. I was absolutely astonished to find the story of love and devotion, and the record of grief, which I outline in the book. Since then I have tried hard to find out as much about Jack Fothergill as I possibly could and I tell what I have so far learnt. But there is still more to be discovered. It is such a sad story, isn't it? But so deeply moving.

Scott: What is a typical day of writing for you? Do you try and achieve a set number of pages or words and how many hours would you spend on a normal day or writing?

Michael: Manning Clark said to me when I was doing my doctoral thesis that if you wrote 1000 words every day you would end up learning how to write and you would write a great many books. I have tried to write up to 1500 words since I became a full-time writer and researcher in 1996. Never more than 1500 because over that limit I find I can't write much the next day. We all have to know our limits. I write first thing in the morning and sometimes I might be finished by 10 – 10.30. That's a very good day (like today in fact). Other times it takes longer. Then I have a break, review what I have written until lunch time or thereabouts and then spend some time in the afternoon plotting the next day's writing or looking up facts. I'm happiest when I'm writing and find its a superb way of passing the time. Sometimes when I come back to review that day's writing I say to myself 'I didn't know that, where did that come from?' But there are periods where you can't be writing because you haven't got anything to say. That's when you might need to spend months in libraries and archives working on the coming writing project. As I grow older I find I'm less able to spend long hours in libraries so I need to chop my day up quite carefully.

Scott: Who are your five favourite authors?

Michael: Tough question. Alan Bennett for the voice that comes from the page in such clarity. Evelyn Waugh. If I could ever write with such sense of place and person as he does in the prologue to Brideshead Revisited I'd be a very happy man. Tony Judt, whom I've only just discovered, so that's cheating a bit. Charles Bean particularly in his more personal writings, journal and letters, but part of his history too and for his majestic conclusion to the official history which I always read aloud to my travellers at the end of a battlefield tour. Anthony Powell for the range and achievement of A Dance to the Music of Time which I try to reread every other year or so and always find new things in it.