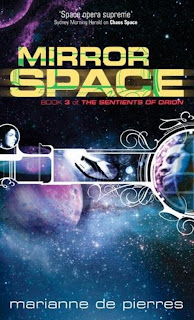 The third volume in Marianne de Pierres' critically acclaimed space opera sequence.
Araldis is still under occupation by hostile forces, and with the Orion League of Sentient Species seemingly unable - or unwilling - to help, Mira Fedor is forced to turn to the mercenary captain, Rast Randall, if she is to save her planet. But while Rast's contacts may be free of political constraints, what they lack in red tape they more than make up for in ruthlessness. As some of their hidden strategies are revealed, others become even more opaque. Why have the philosophers of Scolar been targeted? How far does the Extropist influence extend into Orion space? From Lasper Farr, the Stain War veteran and ruler of the junk planet Edo, to the Sole initiates at Belle Monde to Rast herself, everyone is pursuing their own agenda. But are they really separate goals? Or are events rushing to a single, terrifying conclusion...?

Marianne de Pierres is the author of the acclaimed Parrish Plessis and Sentients of Orion science fiction series. The Parrish Plessis series has been translated into eight languages and adapted into a roleplaying game. Marianne is an active supporter of genre fiction and has mentored many writers. She lives in Brisbane, Australia, with her husband, three sons and three galahs.

The third book in the Sentients of Orion Space Opera series, but not the last as I first thought. I’ve seen an ad for a fourth book that states it is the last, Transformation Space. Sounds like the Hitchhikers Guide to the Galaxy type trilogy to me.

Mirror Space continues to adventures of the MC trying to save her home world, with more opposition and hardships than seem possible. The Orion League of Sentient Species is still unwilling to assist young Mira in freeing her world from the hostile forces occupying the planet.

The intertwined stories from the other characters glue together nicely in this third book, crossing paths and continuing on their way. Now in the third book of the series, many of the main characters have developed from their humble beginnings to well rounded and interesting players.

Look forward to seeing how things pan out in the final novel.
Posted by Scott Wilson at 5:26 PM