Book review: MI6 The History of the Secret Intelligence Service 1909-1949 by Keith Jeffery 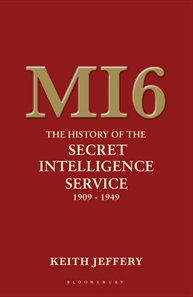 The first - and only - history of the Secret Intelligence Service, written with full and unrestricted access to the closed archives of the Service for the period 1909-1949.

A groundbreaking book, this unprecedented study is the authoritative account of the best-known intelligence organisation in the world. Essential reading for anyone interested in the history of espionage, the two world wars, modern British government and the conduct of international relations in the first half of the twentieth century, MI6: The History of the Secret Intelligence Service 1909-1949 is a uniquely important examination of the role and significance of intelligence in the modern world.

Keith Jeffery is Professor of British History at Queen's University, Belfast, and a Member of the Royal Irish Academy. In 1998 he was the Lees Knowles Lecturer in Military Science at Trinity College, Cambridge, and in 2003-04, Parnell Fellow in Irish Studies at Magdalene College, Cambridge. Jeffrey is the author of fourteen previous books. He lives in Northern Island.

Keith Jeffery accepted the task of writing the history of MI-6, the SIS (Secret Intelligence Service) from the SIS itself, who wished to "commission an independent and authoritative volume" on the anniversary of their centenary. I’m not sure how independent an author can be when commissioned by the very body they are documenting though.

The book only covers from MI6 beginnings in 1909 to 1949. Unfortunately, the story stops here as we are told in the well written forward and preface is that the facts are still too sensitive and current to make available to the public. There are also explanations of how and why the agents and people who have worked for the SIS are protected.

If you are expecting a thrilling novel-like book similar to a James Bond novel you will not find it here. This book is very much a textbook for historical records and accuracy, documenting accurately the multitude of operations.

The book contains vivid accounts of SIS successes in the First World War such as the secret agent organisation, “La Dame Blanche”, responsible for providing invaluable information on enemy troop movements; secret reporting from inside Germany, and the daring exploits of Lieutenant Augustus Agar VC, during the Russian Revolution, who sank several Soviet warships in attacks using fast motor boats.

The turning point in Jeffery's story, the making of a secret service with a truly international range, was the Second World War. This was the golden age of SIS. The budget tripled. Personnel soared from fewer than 100 to almost 1,000. But it was also the beginning of the end. Philby, Burgess and Maclean were all in place by 1941, the former an object of admiration respect.

At over 760 pages, this is a mammoth book to read, especially with the mundane aspects of bureaucracy, but for a solid historical look at the organization, it is a comprehensive and well documented book.
Posted by Scott Wilson at 1:07 AM