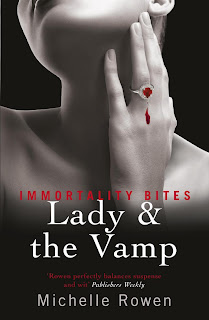 She fights. He bites.Janie Parker's a supernatural assassin - not by choice, but what's a girl gonna do? The only thing standing between her and decapitation at the hands of her hellish boss is a magical artifact called The Eye. To get it, all Janie has to do is find a dark, broody vampire named Michael Quinn and take it. Easy, right? Except if Quinn keeps kissing her that way, she just might lose her head...n more ways than one.Former vampire hunter Michael Quinn is determined to become human again. If he grabs hold of The Eye and makes a wish - then boom, everything's good with the world. But now Quinn has a sassy tagalong with a long, delectable neck and orders to stake him on sight. He just hopes his first bite won't be Janie's last moment on earth...

Michelle Rowen has written novels in the areas of paranormal romance and young adult fantasy. She lives in Southern Ontario.

Lady and the Vamp

This is the third book in a series and like Rowen's other books, stands alone well enough, though it's a great deal richer when the first two books, Bitten and Smitten and Fanged and Fabulous are read first. On the other hand, it doesn't rely heavily on recapping the back story from the first two books, so if you start with Lady and the Vamp, you're still in fairly good shape.

Lady and the Vamp is about two main characters, Quinn who used to be a vampire hunter but was recently turned into a vampire. Having seen both sides, he becomes sensitive and no longer wants to kill anyone, human or vampire. Janie is a human mercenary who is good at killing by staking vampires and shooting silver bullets at werewolves. Quinn learns there is an artifact called the Eye which will grant one wish to one person every thousand years. The thousand year moment is now. Quinn wants to find the Eye to turn himself back into a human.

There are plenty of supernatural elements to keep the paranormal romance lovers happy, with vamps, ghosts, evil-eating tree, and demons. There is the usual conflict and tension between the two main characters, Quinn and Janine here, but it is well constructed so quite entertaining.
Posted by Scott Wilson at 1:47 PM